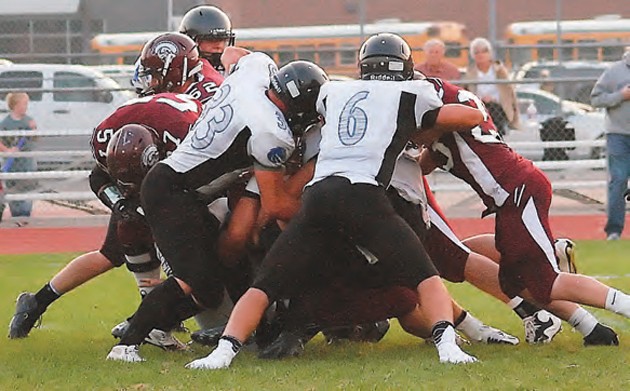 Rarely does one play mean so much in a football game.

Stansbury trailed Morgan 27-28 after scoring a touchdown in the first overtime to match Morgan’s overtime touchdown. The Stallions had two options: 1. Attempt to kick a PAT to tie the game and send it into a second overtime, or 2. Go for a two-point conversion which would mean a victory if the play succeeded or defeat if it failed.

The Stallions did not bring their kicker out for a PAT. With the decision made, it was the offense that lined up three yards from the goal line for a two-point conversion attempt.

Stallion quarterback Chase Christiansen took the snap, made a spin move and followed running back Jackson Clausing through the line for a successful two-point conversion and and a 29-28 victory. Players and fans stormed the field to bask in the euphoria as the Stallions improved to 6-0 on the season and 3-0 in Region 11 games.

“I faked it to Jackson (Clausing) and followed him into the line,” the quarterback said. “I wouldn’t call it total confidence that we would get in, but I knew there was a real good chance we could do it. I never got hit until someone grabbed me at the goal line, but I was already in (the end zone).”

The 2012 Stansbury at Morgan football game turned out to be a classic.

The Stallions grabbed their first lead of the game with touchdown to open the fourth quarter which made it 21-14. After a Morgan turnover, the Stallions tried to put the game away with a pass to the end zone from 35 yards out with 4:39 remaining in the game. The pass was intercepted in the end zone and gave the Trojans new life.

Morgan worked its way down the field with an 80-yard drive and scored to tie the game at 21-21 to send it into overtime.

Stansbury won the toss and opted to defend Morgan from the 25-yard line in the OT. The Trojans gouged the Stallions on three running plays for a touchdown plus an extra point to go up 28-21.

The Stallions needed four rushing plays to reach the end zone for a touchdown in overtime with Christiansen and Clausing carrying the football. Christiansen ran to the 21, Clausing to the 16 and then the 11. On first-and-10 at the 11, Christiansen made one of his patented moves running to the right and cutting back to the left for an 11-yard TD to make it 28-27 before the PAT. Then, Christiansen hit the big hole provided by the offensive line and Clausing to score the 2-point PAT.

“I’m so proud of this team,” said coach Clint Christiansen. “Tonight was really a defining moment for our team — our players showed a lot of character. Those were two good teams going at it out there and both can go a long way in the playoffs. We hear a lot about Juan Diego and the St. George teams, but the teams you saw out here tonight are two you’ll need to look out for.”

Morgan opened the game with a reverse on the kickoff to gain great field position inside Stansbury territory at the 46. Morgan needed 13 plays, but methodically moved down the field until Kade Carrigan popped it into the end zone from 1-yard out to make it 7-0 with the PAT with 6:43 left in the first quarter.

After a good return by Dakota Case, the Stallions fumbled on the second play from scrimmage at their own 47, but the Morgan could not capitalize on the turnover. Stansbury’s Austin Kinkade and Iosua Opeta combined for a sack to force a Morgan punt.

The second possession for the Stallions was much better with the team driving from its own 24 to score a touchdown with 49 seconds left in the first quarter. A huge play came on fourth-and-three at the Morgan 41. Stansbury lined up for a punt, but snapped the ball to blocking back Tyler Stevens whose speed got him a way from trouble behind the line of scrimmage and then he was off to the races. Stevens ran down the near sideline to the Morgan 13. The big-gainer proved costly. Stevens injured his leg on the play and is expected to miss the rest of the season.

Darius Johnson kicked the PAT with Gage Manzione holding to make it 7-7.

The Stallions got the ball right back when kicker Alex MacKay lined the kickoff, which took a big bounce off a Morgan player and richocted right back to MacKay at midfield. On the next possession, Chase Christiansen’s arm was hit on a pass play and the ball was picked off by Morgan’s Carrigan who scooted all the way to the Stansbury 18. The Stanbury defense dug in, but the Trojans managed to gain a first down on a fourth-and-one inside the 10 yard line. Joseph Kippen ran to the one and Lantzen Toomer scored. The PAT made it 14-7 Morgan with 9:30 until intermission.

The Stallions completed a solid drive as time wound down in the second quarter with runs from Clausing, Zayne Anderson, Alex MacKay and Chandler Staley with Clausing scoring from eight yards out to make it 14-14 at intermission with Johnson’s kick.

The Stansbury offense kept Morgan off the field for most of the third quarter with an 18-play drive that burned about eight minutes off the clock. Jesse Horowitz completed several sparkling runs in the drive and Christiansen completed a short pass to Jaron Moon and later a 14-yard toss in the flat to Horowitz down to the Morgan 24. Christiansen would not go down on a fourth-and-one at the 15 with two defenders draped around him. He was finally wrestled down at the 13. He then kept to the four yard line. Two runs gave Stanbury first-and-goal at the three yard line, where Clausing scored his second TD of the game to give the Stallions a 21-14 advantage with 11:55 left in the contest.

The Stallion defense was stellar on the next series with solid tackles from Clausing, Moon and Colton May. Morgan turned it over on downs at the Stanbury 45.

After the teams traded possessions, Morgan started a drive at its own eight yard line. The Trojans pushed it out to the 37, but then mishandled a hand-off and the Stallions recovered at the Morgan 35. Stansbury threw to the end zone on the next play, but it was picked off by Morgan.

With a balanced attack of pass and run the Trojans drove 80 yards for a touchdown to tie the game 21-21 with 59 second left in the contest.

That was followed by the dramatic overtime period.

Stansbury hosts Desert Hills on Friday at 7 p.m.. The Thunder knocked Stansbury out of the playoffs in the second round last season.