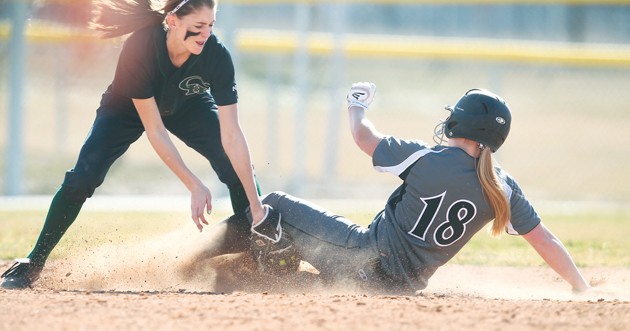 Stansbury High School’s Katelyn Robinson slides into second base Monday against Copper Hills in the bottom of the sixth inning. Robinson came around to score the winning run.

Stansbury cashed in on its only extra-base hit of the game to defeat Copper Hills 4-3 on Monday.

With the scored tied 3-3 in the bottom of the sixth, Katelyn Robinson led off the inning with a line shot at the third baseman in fair territory. The ball richoted off the fielder into left field foul area that allowed Robinson to sprint to second base with a double.

Karlee Manzione pushed Robinson to third base on a sacrifice grounder, and Robinson eventually scored the winning run on a wild pitch.

Stansbury scored one run in the first inning and two more in the second inning to take a 3-0 lead going into the top of the fourth.

Robinson started in the circle for the Stallions and pitched three innings of shutout softball until she got off the mark in the top of the fourth to allow Copper Hills back in the game. Robinson walked three in a row and Beth Chipman came on in relief. Copper Hills cashed for three runs on a wild pitch and a base hit.

“We have a really good team, and they’ve been playing together since they were freshmen,” Stansbury coach Bridget Clinton said. “They’re getting better each year, and the expectations are high.”

Stansbury is back in action today at home against Hunter. The Stallions play in the SUNROC Invitational this Friday and Saturday in St. George with games against Riverton, Lone Peak, Canyon View and Herriman.