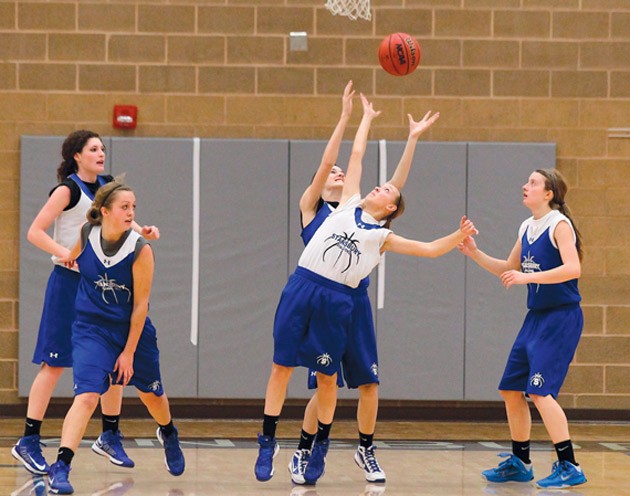 Stansbury High School girls basketball team runs a drill Wednesday at practice. Stansbury faces Carbon on Saturday in the first round of the 3A state playoffs.

While the other five boys and girls varsity basketball teams in Tooele Valley are now thinking about next year, the Stansbury High School girls team still has business to attend to this year.

The Stallions face Carbon Saturday at 7 p.m. in Price in the first round of the 3A state basketball tournament. A victory would send them to the Final 8 tournament next Thursday through Saturday at Weber State.

Stansbury finished third in Region 11 with a 7-5 record while Carbon finished second in Region 12 with an 8-2 mark.

“This game should be similar to the games we had with Bear River and Ogden,” said Stansbury coach Kenzie Newton. Stansbury fans and players will hope the results are more like the games against Ogden.

The Stallions played four tight contests against both Region 11 foes with an overtime loss and a 4-point loss to the Bears, but a 7-point victory and double-overtime triumph over Ogden.

“We feel the difference-maker will be our preparation this week,” Newton said. “With a whole week before the game we will have the time to prepare for Carbon. During region you play twice a week so you don’t have as much time to concentrate on your next opponent.”

The Stallions started right in at Monday’s practice focusing on the style of game they should see from the Dinos, and the things they need to sharpen up on before the encounter.

“I attended a practice at the University of Utah and watched how they worked practice and got a few ideas. They have a 15-page scouting report on teams, we only have a 5-page report for our game against Carbon,” Newton said.

Carbon uses some trapping presses on defense and the Stallions were working on ways to beat those presses during practices this week.

Carbon’s leading scorer is 6-foot-1-inch post player Shelby Cornforth who averages 12 points per game. She scored 15 points the first time Carbon played Delta, but only 4 points in a rematch at Delta last Friday.

“She (Conforth) always wants to go to the right so we want to force her to go to left,” Newton said about defending Comforth. “We’ll throw a lot of different defenders at her so she never feels comfortable out there.”

Stansbury went to the tourney last year as the third seed from Region 11 and lost 56-32 at Juab.

“We’re a lot more confident going into this game Saturday; we believe we can get this win. That Juab team last year had a couple of really good dominant players they could go to. I believe those two are playing in college now,” Newton said. “Carbon has only one senior this year and they don’t have the dominant players like Juab did. Carbon does have a great tradition in girls basketball so they always have a good team.”

The Stallions will rely big-time on there three seniors to pull off the victory at Carbon. Karlee Manzione will need to be strong inside guarding Comforth, Erika Alvey will need to provide some offensive punch and Becca Lords will need to bring her top-notch defensive game.

Shyan Adams leads the team with 16 blocked shots with Wilson and Manzione at five each.

Manzione has cleaned a lot of glass this year with 114 rebounds. Wilson has grabbed 101 rebounds, Erika Alvey 99 and Adams 81.

The Alvey sisters have been top-notch thieves this season with a combined 79 steals with Erika at 46 and Madie at 33. Lords has 25 swipes, Adams 22 and Wilson 18.