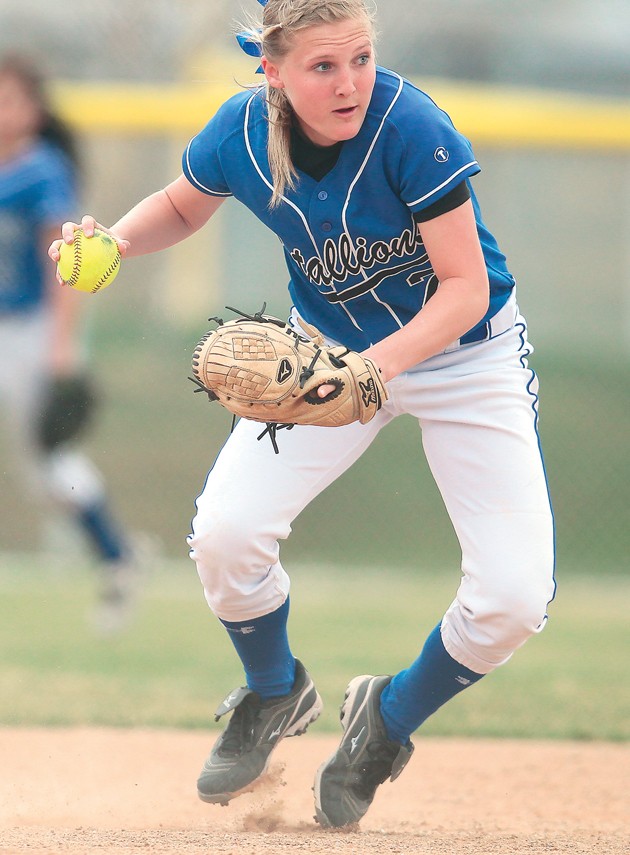 Stansbury High School junior Lindsay Guymon throws the ball to first base in a game against Bear River on March 23, 2012. Lindsay and her sister Alyssa both were diagnosed with diabetes before the start of softball season and have relied on teammates for support.

The Stansbury Stallions have a lot to play for this season, and they have dedicated the season to two girls in particular.

At the start of the season, sisters Lindsay and Alyssa Guymon both were diagnosed with diabetes. During this trying period, the Stallions have rallied around the two girls.

“At first I was really shocked. I was scared and nervous,” said senior Lindsay Guymon about when she first learned of her diabetes. “My teammates were very supportive, and the very first day they found out they did a fundraiser for me and my sister.”

Clinton’s son was diagnosed with diabetes, so she said she understands the hardships children can go through.

“I know how it is to be involved in that and be an athlete to try and deal with all of that,” Clinton said. “We’ve had to deal with that as parents and adjust to that and see what kind of toll that takes on a kid.”

Clinton said she’s proud of how Lindsay and Alyssa Guymon have responded to news.

“Both Lindsay and Alyssa have done really, really well dealing with that, which is pretty impressive,” she said. “And they managed to still compete at a high level and be successful.”

“They’re showing that it’s not always about just going out and playing softball,” she said. “It’s about those relationships that you make with each other. The girls are all a pretty close-knit bunch of girls, and they were pretty upset when all of that happened. They wanted to do something to show that they supported [Lindsay and Alyssa]. It’s helped the sisters deal with that.”

Lindsay Guymon said her teammates have meant the world to her during this time.

“They came and visited me in the hospital both days I was in there,” she said. “They’ve supported me in everything. They brought me treats. They’re just amazing.”

She said she wants to show the world that nothing is impossible. She said anything is possible if people will set their minds to it. She also said having her sister with her and going through the same thing has helped in the process of handling diabetes.

“We learned everything together — pricking our fingers, giving insulin, everything,” Lindsay Guymon said. “It’s been nice to have somebody to lean on and know that I’m not the only one going through this.”

The Guymon sisters’ mom was diagnosed with diabetes when she was 20 years old, which has provided another example for the girls to look to.

“I’ve had a few meltdowns so she’s been saying that it’s going to be all right, and that she’s lived with it for 20 years,” Lindsay Guymon said. “It’s possible to live a normal life. She’s also been my rock this whole time.”

On Wednesday, the Stallions faced the Ben Lomond Scots in a game ended by the 15-run rule.

Lindsay Guymon went 0-for-2 in the game with a walk and a run scored, helping contribute to Stansbury’s 16-0 win that was called after the third inning. Senior outfielder Katelyn Robinson led the charge with a 2-for-2 batting day, hitting a double and a home run with 5 RBIs. The home run was an inside-the-park grand slam in the bottom of the third inning that made the score 12-0.