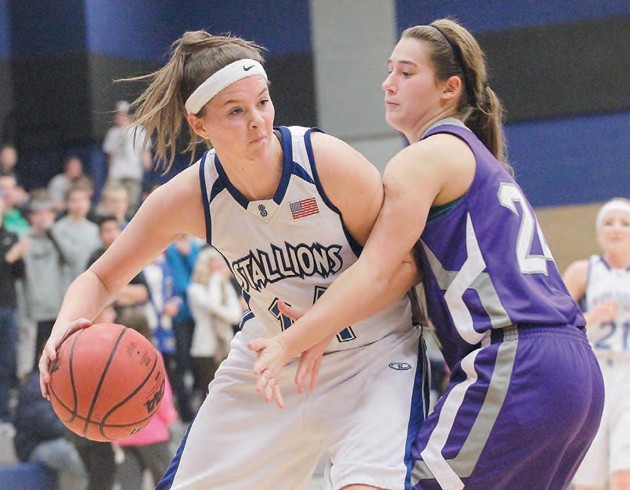 Stansbury High School’s Bailey Wilson (14) works for offensive positioning while Tooele’s Courtney Schiwal (24) guards her Tuesday. Wilson led the Stallions in scoring with 18 points in their 16-point win over Tooele.

The Stansbury Stallions (2-7, 1-1 in Region 11) opened Tuesday’s game against the Tooele Buffaloes (2-8, 0-1 in Region 11) with a bustle of offense in the first quarter, and Tooele could never quite recover as Stansbury picked up its first region win of the season 54-38 on the first night of Rivalry Week.

Tooele put together a run that made the score 11-9 in the first quarter off a 3-pointer by sophomore guard Taylor Thomas and a steal and fastbreak layup by sophomore forward Baylee Hansen. But Stansbury put an end to Tooele’s hopes immediately with a 10-2 run to end the quarter, highlighted by three baskets from junior forward Bailey Wilson. She had 8 points total in that first quarter to give the Stallions a 21-11 lead.

Both coaches said the same thing when figuring out why Stansbury pulled away to win, and that was Stansbury made shots and took advantage of opportunities.

Stansbury coach Kenzie Newton said her girls had the same opportunities in this game that they had against Bear River, but the execution worked better in this game.

“We had a lot of the same opportunities, and I think we just capitalized on them more tonight,” she said. “That was basically it I think, just finishing those shots we should’ve made in that game.”

“They just made shots,” Ashby said. “That’s the biggest thing — Us not being able to box out, the Wilson girl being able to finish shots, and we gave them second and third chances to make points. We knew what they were going to do. They didn’t do anything that we didn’t expect. Here at home they just made their shots. They’re a good shooting team.”

Stansbury’s Wilson scored 18 points with 7 rebounds and 2 assists. Her main shot throughout the contest was from the sides at about 15 feet from the basket.

“[Wilson] can shoot outside and then obviously has a good inside presence,” Newton said. “It’s tough to guard when someone has that. When she hits a few jump shots she kind of gets in that zone. That’s key for her is building that confidence.”

Everyone from Stansbury got involved in the action. Senior guard Erika Alvey just missed out on a double-double as she scored 10 points with 9 rebounds, 3 assists and 3 steals. Junior forward Shyan Adams scored 12 points with 7 rebounds, 1 assist and 1 steal. Senior center Karlee Manzione scored a bucket with 5 rebounds and 1 assist. Junior guard Madie Alvey, inserted into the starting lineup while senior guard Rebecca Lords played limited minutes because of a knee injury, scored 7 points with 6 rebounds, 2 steals and 1 assist.

Lords suffered a knee injury against Bear River, but she did play against Tooele in limited time. She came off the bench and dished out an assist to Madie Alvey in the second quarter that put Stansbury up 29-14. Junior center Danielle Dunn came off the bench and grabbed 3 rebounds. Sophomore guard Rachel Prescott scored 3 points with 2 rebounds and 1 assist. Sophomore forward Kallie Stewart scored 2 points and grabbed 4 rebounds.

“It was a good, all-around team performance,” Newton said. “It was nice to see that finally come together. It seems like we’ve had a few games where one player’s had a good game, but it’s definitely nice to see everybody contribute.”

When the Stallions needed someone to step up, they got just that. Following Wilson’s dominant first quarter, Adams highlighted a run at the start of the second quarter just when the Buffaloes threatened to go on their own run. Then in the third quarter, Erika Alvey did the majority of her damage to put the game out of reach.

Tooele didn’t break through Stansbury’s 38-22 halftime lead, but it did what it could to not let the Stallions extend it further in the second half.

“I think that’s the thing that we have is finding a way to  become more consistent — looking really good one game and not looking good another game,” Ashby said. “It some ways that’s youth. We’ve played a lot of games, so we can’t keep using the youth card too much. These girls are old enough and mature enough.”

The Buffaloes made highlight plays of their own, most notably the steal by Haskell that she dished off to Searle to run the fastbreak. Searle then bounce passed to Thomas for a layup that made the score 36-18 with just over two minutes left in the second quarter.

Stansbury’s largest lead of the game was 20 points, and it reached that margin three different times at 36-16, 47-27 and 51-31. Tooele kept Stansbury from building it further each time.

Tooele plays its second region game tonight when it hosts Grantsville at 7 p.m. Grantsville goes into that game coming off an 11-point loss to Maeser Prep.

Stansbury tries to win another one tonight, but it will have to go through first-place Morgan (8-2, 2-0 in Region 11). The game takes place at Stansbury High School with a 7 p.m. tip-off.

“Morgan’s a tough team,” Newton said. “They’ve got great ball handlers. They’re more experienced. Hopefully our confidence continues with our shooting. Then defensively we just can’t give up anything easy.”