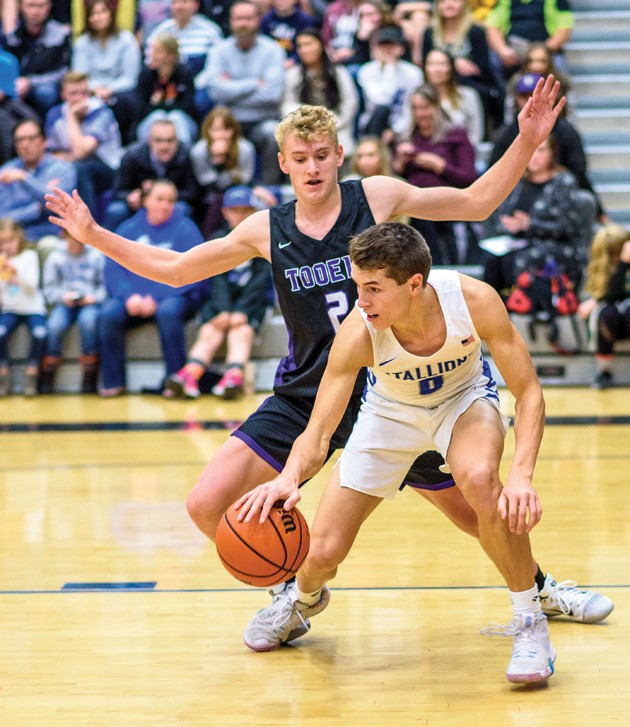 Stansbury’s Jaden Jenkins (0) handles the ball as Tooele’s Canyon Christensen defends during a Dec. 17 game at Stansbury High School. Jenkins had 15 points and 12 rebounds in the Stallions’ 62-45 win over Ben Lomond on Friday.

“We have to have energy and effort on every possession, whether it’s on offense or defense,” Stansbury head coach Joe White said. “We have five region games and four big ones left. We need to stay focused.”

Stansbury held the Scots to seven points on two field goals in the third quarter. Giles hit a 3-pointer with three seconds left in the period to give the Stallions a 37-28 lead.

Ben Lomond made an 8-0 run in the fourth, mostly from the free-throw line. Senior guard Mason Buck was fouled on a missed 3-pointer with 5:18 to go, hitting all three of his foul shots to make it 48-34, and junior point guard Ryan Alvarez scored through a foul driving coast-to-coast about 30 seconds later to pull the deficit back down to nine.

Buck’s free throws were the first points the Scots scored in the fourth quarter, as Stansbury opened the final stanza on a 14-0 run.

Thevenot tied the game from the free-throw line at 21-apiece after Ben Lomond head coach Tanoka Beard was given a technical foul.

The win brought Stansbury to 12-5 on the season and 4-2 in Region 10 play. It also guaranteed the Stallions a winning record with five regular season contests remaining. This is the first year in Stansbury’s existence the team has finished above .500.

“There’s been some really good talent come through this school that hasn’t accomplished what this team has,” White said.

Stansbury’s players wore red and black socks during the game, a way to show support for Grantsville in light of a recent shooting that left four family members dead and one injured earlier this month.

“You can’t change what happens in life,” White said. “You just support them, even if it’s with a pair of socks.”