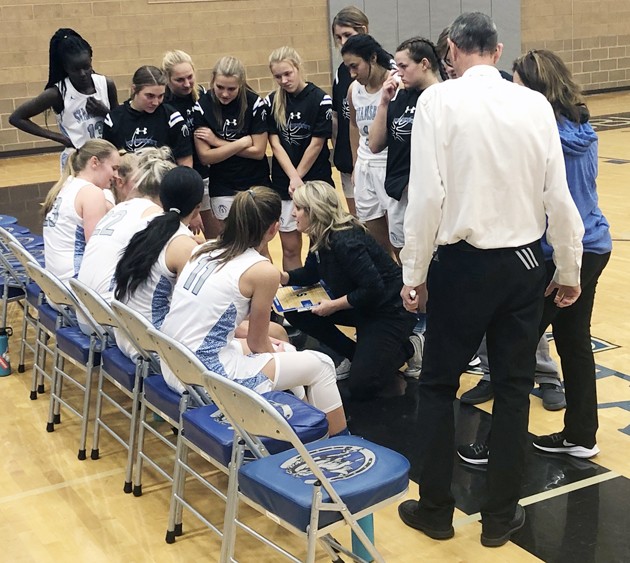 The Stansbury girls basketball team listens to coach Brittany Davies’ instructions during a timeout in Tuesday’s non-region game against Bear River at Stansbury High School. The Stallions beat the Bears 34-21 in Davies’ first game as the team’s head coach.

November 27, 2019
Stallions shut down Bears in second half

The Stansbury girls basketball team was frustrated as it went into the locker room at the end of the first half Tuesday night at Stansbury High School, recording more turnovers (eight) than points (five) over the first 16 minutes.

However, it was a totally different story after the break. The Stallions forced 16 Bear River turnovers and went on a 29-2 run that lasted nearly 14 minutes, turning an eight-point halftime deficit into a 34-21 win over the Bears in head coach Brittany Davies’ debut.

“We went into the locker room at halftime and we were all kind of disappointed in ourselves,” Stansbury senior Madison Vandam said. “We were like, ‘OK, we’ve got to pick it up and we need to figure something out.’ We just figured we were going to work hard on defense, we were just going to blow it out and go on offense. It ended up being unstoppable.”

The Stallions (1-0) turned up the pressure in the second half, despite falling down by 11 points on a 3-pointer by Bear River’s McKenzie Bywater on the opening possession of the third quarter. Seniors Kayla Alvey, Hannah Anderson and Vandam picked off steal after steal, leading to easy baskets on the other end.

Anderson went coast-to-coast with a steal and a layup to pull Stansbury within seven points at 16-9, and Epa Tia had back-to-back buckets to close the gap to 16-13 with 5:04 left in the third quarter. Alvey scored off a feed from Anderson to make it 16-15, and the Stallions took their first lead at 17-16 on a putback layup by Malia Tia.

“What these girls are all about is their defense and intensity,” Davies said. “In a game, your offense comes with your defense. To turn around a game, you’ve got to play some defense. We came out and made an adjustment, switched to a man press and they just got after it.”

Stansbury’s surge continued after another steal by Epa Tia as Alvey drained a 3-pointer from the left wing, and Anderson and Sarah Gatluak added layups before the third quarter expired to give the Stallions a 24-16 lead.

Bear River (0-1) finally broke a nearly quarter-long scoreless drought with a basket by Bywater that cut the lead to six with 7:28 left in the game. However, the Stallions responded with another 10 unanswered points, including four from Vandam, to put the game out of reach.

Davies said the way her team not only came from behind, but dominated the second half, was a huge momentum boost for a young team with a new head coach.

Alvey finished with seven points for the Stallions, while Anderson had six. Epa Tia had five points, Malia Tia had four and Gatluak and Ainsley Thurber each scored two.

Stansbury will have a tough challenge in front of it on Tuesday night, when the Stallions travel to Grantsville to face the county rival Cowboys.