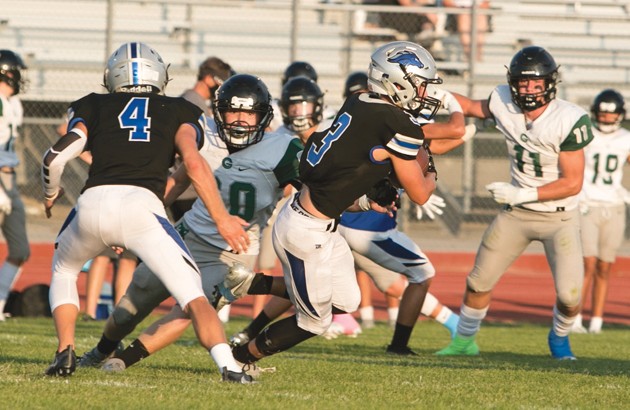 Stansbury’s Nate Bushnell (3) looks for running room after taking a handoff from quarterback Kru Huxford (4) during an Aug. 28 game against Green Canyon at Stansbury High School. Bushnell rushed for 48 yards and a touchdown, while Huxford threw five touchdown passes and rushed for another score in the Stallions’ 56-21 win over Cedar Valley on Friday night.

The Stansbury football team has had some issues with sluggish starts to games this season, but once the Stallions get going, they are a difficult bunch to stop.

On Friday night in Eagle Mountain, Stansbury found itself trailing Cedar Valley 14-0 early in the second quarter before its offense caught fire. The Stallions scored touchdowns on eight of their next nine possiessions en route to a 56-21 win over the Aviators in the opening game of the Region 10 season at Cedar Valley High School.

Each team went three-and-out on its first possession before the Aviators (1-3, 0-1 Region 10) put together their first scoring drive of the game — an 80-yard, 17-play masterpiece that included five successful third-down conversions. The last of those came on quarterback Payton Weber’s 7-yard touchdown pass to KJ Fisher on third-and-goal, putting Cedar Valley up 7-0 with 2:01 left in the opening quarter.

Another three-and-out by the Stallions (3-1, 1-0) gave the ball back to Cedar Valley on its own 31-yard line. A 37-yard pass from Weber to Lucas Peck on third-and-11 extended the drive, and after a 22-yard screen pass to Parker Christensen put the Aviators in the red zone, Weber found Noah Burnham for another 7-yard TD on third down to extend the lead to 14-0 just over a minute and a half into the second quarter.

However, the momentum swung in the other direction as soon as Stansbury got the ball back. Stallions quarterback Kru Huxford connected with Pae Tia on a 30-yard pass to open SHS’ next drive, and three plays later, Nate Bushnell sprinted 35 yards up the middle for a touchdown to slice Cedar Valley’s lead in half.

A disastrous next possession by the Aviators, capped by a partially blocked punt, gave Stansbury the ball on Cedar Valley’s 40-yard line. Huxford and Bushnell connected on a 30-yard screen pass, and then Huxford threw his first TD pass of the evening on a 10-yard toss to Cayden Clark to tie the game with 6:55 left in the first half.

The Aviators’ next drive stalled near midfield, and Stansbury took over on its own 18-yard line after a Cedar Valley punt. Bushnell picked up 4 yards on third-and-1 to keep the drive alive, and Huxford later found Brandon Funk for a 46-yard pass that got the Stallions to the Aviators’ 21-yard line. The drive appeared to have stalled when Bushnell was stopped for a 1-yard loss on third-and-2, but Huxford ran it in from 14 yards out on fourth down to give Stansbury the lead with 2:36 left.

With time winding down before halftime, the Stallions were far from done. A quick three-and-out by the Aviators gave SHS the ball at its own 40-yard line, and Huxford hit Clark for a 60-yard TD pass on the next play to extend the Stallions’ lead to 28-14 with 1:39 left in the half. Stansbury forced another Cedar Valley punt with 25 seconds left, and on second-and-10 from the Stallions’ 31, Huxford connected with Funk for a 69-yard TD with nine seconds left on the clock to give SHS a 35-14 halftime lead.

A game that once seemed tenuous was now firmly in Stansbury’s control, and the Stallions weren’t about to let up. SHS received the second-half kickoff and took possession at midfield after a failed onside-kick attempt by the Aviators. Huxford opened the drive with a 33-yard run to the Aviators’ 16-yard line, and a pass to Tia moved the ball to the 1. After Bushnell was stuffed on first-and-goal, Huxford threw a 4-yard TD pass to Tia for a 42-14 lead with 10:33 left in the third quarter.

Stansbury’s next possession ended up in the end zone, as well. The Aviators gave the Stallions a first down with an encroachment penalty on third-and-4, and Bushnell’s 6-yard run on third-and-5 extended the drive. Cedar Valley had an opportunity to escape the drive unscathed after limiting Bushnell to 3 yards on a screen pass on third-and-11, but Huxford and Clark connected for their third TD of the evening on a 26-yard pass to pull ahead 49-14 with 4:22 left in the third quarter.

Cedar Valley went three-and-out two more times, sandwiched around a fumble by the Stallions, before Stansbury put the exclamation point on its evening with a 36-yard TD pass from backup quarterback Mathew Topham to Carson Dean with 9:05 left. Cedar Valley got back on the scoreboard on a 10-yard pass from Weber to Peck with 2:45 left in the game, with the result already long since decided.

Huxford was 12-for-18 for 301 yards, five touchdowns and no interceptions through the air for the Stallions, and he added 70 yards on 10 rushing attempts. Funk had two receptions for 115 yards and Clark caught three balls for 96 yards, while Tia had four catches for 53 yards. In all, Stansbury racked up 501 yards of total offense.

Meanwhile, the Aviators managed just 11 rushing yards. Weber was 21-for-38 for 289 yards and three TDs. Justice Minnis had three of the Stallions’ five sacks in the game, with Jacob Rich and Bryce Gordon picking up one each. Tia had a team-high 10 tackles, with Gordon picking up nine and Clark adding eight.

Stansbury will travel to Tooele for the annual Battle of the Boot game Friday night at Buffalo Stadium.