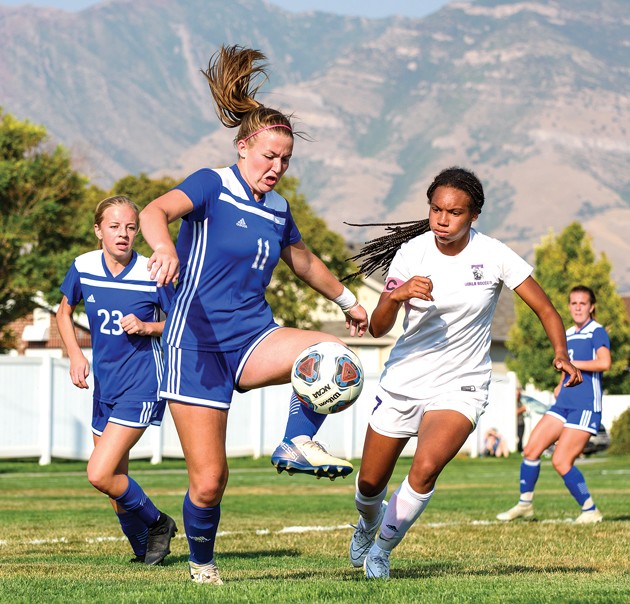 Stansbury’s Rylie Klenk (11) tries to clear the ball out of danger as Tooele’s Makenna McCloy applies pressure during the second half of Monday’s Region 10 girls soccer game at Stansbury High School. Stansbury won the game 2-1.

The girls soccer rivalry between Stansbury and Tooele seems to get more and more competitive each season, and Monday’s matchup at Stansbury High School was the latest chapter in the story.

It was one that left one coach happy to have escaped with a victory, while the other was baffled at how his team’s stellar effort ended in a loss. Stansbury won 2-1, scoring the game-winning goal on a penalty kick by Chloee Corbett in the 52nd minute, but Stallions coach Spencer Call admitted that his team wasn’t at its best.

“We’re a really good team, and the sign of any good team in any sport is when you can win a game when you don’t play your best,” Call said. “We did not play good — we played one of our worst games of the year — and we still won, and that’s a tribute to this team.”

In fact, Tooele (3-6-0, 0-5-0 Region 10) dominated much of the match, particularly in the first half. The Buffaloes could have been ahead at halftime if not for a shot by Cami Eldredge that rang off the crossbar in the 28th minute, and a glorious chance for Makenna McCloy in the 30th minute that was broken up at the last second by Stansbury defender Bethany Johansen.

Instead, Tooele trailed 1-0 less than two minutes in after a communication breakdown between goalkeeper Maddy Lyman and her young defense allowed Stansbury’s Annie Ploehn to score on an essentially empty Buffaloes net. After that, however, Stansbury (5-3-1, 2-2-1) was back on its heels, with Raegan Walker, Liz Lundwall and Ros Stone all keeping Stallions goalkeeper Ainsley Thurber busy turning away opportunities.

“I still don’t know how we lost that game,” Tooele coach Stephen Duggan said. “In terms of of possession, we had more possession. In terms of chances created, shots on goal, shots off-target, corner kicks … we just didn’t turn it into goals, and at the end of the day, goals win games. We lose 2-1, and that’s going to be the result that goes down and that’s the result that you’ve got to take.”

It wasn’t until the 33rd minute that the Buffaloes finally broke through. McCloy attempted a corner kick, and the ball bounced to Walker at the top of the 18-yard box. She made no mistake, ripping a low shot just inside the left post to pull the Buffs even.

Stansbury knew it was fortunate not to be trailing at halftime, and Call made an adjustment to his team’s defensive alignment.

“Stephen (Duggan) completely outcoached me and they outplayed us in the first half,” Call said. “Once I realized what their strategy was, we went to six defenders to block shots on the top of the 18, and I think that was the key in the second half. They were still attacking us, but we had two defensive (midfielders) who were trying to take away their offense. They were outshooting us like crazy and outplaying us like crazy in the first half.”

Even then, the Buffaloes had a couple opportunities to take the lead early in the second half, but Cecily Wolfe’s header off a corner by McCloy went wide in the 46th minute and McCloy had a shot stopped by Thurber seconds later. Stansbury got the break it needed in the 52nd minute when a Stallions player was fouled in the 18-yard box along the right wing, and Corbett’s goal gave them the lead.

But Tooele kept coming. Alyssa Murray was stopped at the right post, and McCloy just missed the top right corner of the net after a one-on-one against Johansen. Wolfe also had a chance at the top right corner, but her shot went high and wide in the 67th minute.

But there was one call that left Duggan scratching his head afterward, when Stansbury was whistled for an apparent foul in the box in the final minutes — but the Buffaloes were given an indirect free kick from just outside the 6-yard box instead of a PK.

“How can he call a foul for dangerous play in the box and not give a penalty? That makes no sense,” Duggan said. “There was no difference in them. That’s disappointing as well. But, you can hang your head and be disappointed or you can be proud, and I’m really, really proud of the effort they put in and the performance they put in. They came to an away game and they dominated the game and they were the better team. We dominated that game, and how we lose it is beyond me.”

However, despite the disappointment of losing, Duggan put things in their proper perspective after a scary moment during the match. With less than two minutes remaining in the first half, Lundwall fell after slipping on the ball and landed hard, suffering an apparent neck injury as her head snapped back and hit the turf. The game was stopped immediately, and Lundwall was transported to the hospital by ambulance for further testing.

“All we did was lose a game,” Duggan said. “The most important thing is that Liz Lundwall ends up safe and well, and she has no problems. We would have loved to win it for her. I asked the girls at halftime to play the game like Liz plays it — to do it for her, to play aggressively and be first to the ball, and that’s what they did. They went out and gave it their best shot.”

Stansbury will travel to Draper on Wednesday to face Juan Diego in the final game of the first round of region play.

“Moving forward, I have all the confidence in the world that we’ll get back on track,” Call said.

Tooele, which has fallen victim to bad luck through its first five games of the region season, will play host to Ben Lomond on Thursday.

“Uintah, we were ahead three times and we lose in overtime,” Duggan said. “Juan Diego, we should have been five up at halftime and lost 2-nil. (Monday), we dominate possession, we dominate chances created and we lose 2-1. The season we’re having — it looks worse than what it is on paper, but in reality, they are so close to it. Will it come Wednesday? Let’s hope so. They just need that one win to breed that little bit of belief and get a bit of wind into their sails to push them on.”