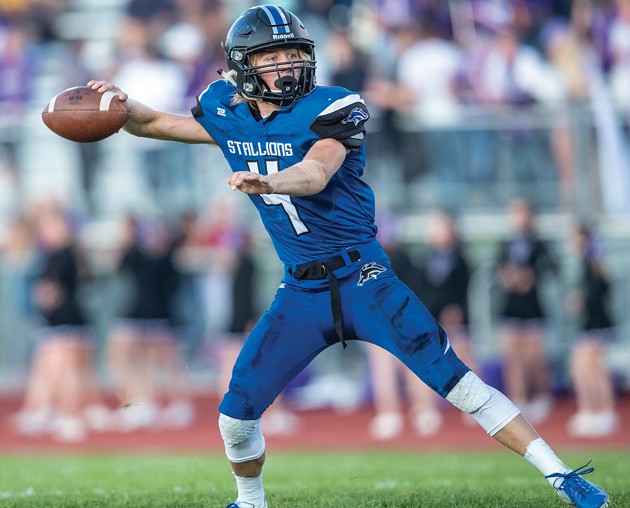 It took six weeks, but somebody finally found a way to slow down the Stansbury football team’s high-octane offense.

After putting up more than 1,000 yards of total offense and 90 points in their previous two games combined, the Stallions mustered just 186 yards in a 38-14 road loss to undefeated Park City in a Region 10 game. Stansbury (3-3, 2-1 Region 10) had just 83 rushing yards against the Miners — 93 fewer than its previous season-low. On the other side, Park City (6-0, 3-0) had a season-high 535 yards of offense against a Stansbury defense coming off a shutout win over Tooele a week earlier.

The Miners took an early 3-0 lead on a 22-yard field goal by Ryan Skidmore, but the Stallions responded with a 4-yard touchdown pass from Kru Huxford to Pae Tia to pull ahead 7-3. However, that was the only time Stansbury led, as Park City scored four unanswered touchdowns over the next two-plus quarters to take control of the game.

The Miners’ explosiveness showed again in the second half, with Jack Skidmore hitting McCurdy for a 92-yard touchdown pass with 8:32 left in the third quarter. Huxford connected with Gabe Harris for an 11-yard TD in the fourth quarter to cut the Miners’ lead to 31-14, but Bauer put the game away with a 70-yard run in the final minutes.

Huxford was 14-for-21 for 103 yards, two touchdowns and two interceptions for the Stallions. Tommy Christopherson, who came in averaging 151.6 yards per game on the ground, was limited to a season-low 62 yards by the Miners’ defense, while Harris was Stansbury’s leading receiver with six catches for 55 yards.

Payton Didericksen led the Stansbury defense with 12 tackles, Tia had 11 and Andrew Hanson had 10 tackles and a quarterback hurry. Daxton Brown had an interception and Harris broke up three passes.

Jack Skidmore was 9-for-14 for 187 yards through the air, and he added 63 yards on nine rushing attempts for Park City. Bauer had 138 yards on 20 carries and McCurdy caught three passes for 125 yards.

Stansbury hits the road this week to face Ben Lomond on Friday night in Ogden. It will be Stallions coach Eric Alder’s first time coaching against his former team. The Stallions will be back on their home field Oct. 4 for their homecoming game against Mountain View.