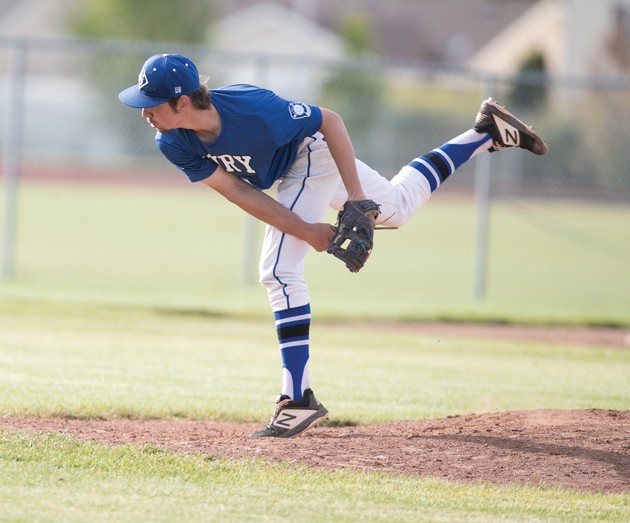 Stansbury’s Tyler Harris delivers a pitch during Monday’s American Legion baseball game against Farmington at Stansbury High School. Harris hit an RBI single to help propel the Stallions to an 8-2 win over Bountiful on Tuesday.

A day after an 18-9 loss to Farmington, the Stansbury baseball team returned to the field Tuesday evening looking to make amends for Monday’s disappointing effort.

As bad as Monday was, Tuesday was that good for the Stallions.

Cayden Clark, Kimball Thorpe and Colton Sundloff put together a dominant game on the pitcher’s mound, the defense played virtually error-free and Stansbury’s offense pounded out 11 hits — four of which went for extra bases — in an 8-2 win over the Bountiful Tribe in an American Legion contest.

“They came back and played well,” Stansbury coach Jason Jones said. “It wasn’t perfect, but we’ll take it after (Monday) night. It just seemed like we were a little bit more relaxed, we had a little bit more energy, got timely hits when we needed them. Our defense and pitching — that’s what it came down to there.”

Clark continued his red-hot summer, pitching three shutout innings. He struck out the first four batters he faced and seven in total while allowing just one hit and one walk. At the plate, he went 3-for-3, finishing a home run short of the cycle.

“He was 13 for his first 13 this summer,” Jones said. “He had a little mini-slump in Logan where he got out two or three times, but he’s impressive. It’s fun to watch. That’s all I do is sit back and watch and enjoy coaching these guys. It’s a lot of fun.”

Clark got Stansbury’s offense started with a one-out double to right field in the bottom of the first inning. His speed-up runner, Trent Jones, scored the game’s first run when the Tribe mishandled Sundloff’s ground ball to second, first bobbling the ball and then throwing it into the first-base dugout. Later in the inning, Sundloff scored on a wild pitch to give Stansbury (10-2) a 2-0 advantage.

The Stallions added three more runs in the second inning, pounding out four hits. Bridger Shields led off with a single, advanced to second on a sacrifice bunt by Ashtyn Blake and stole third base. As Shields stole third, the Tribe’s throw sailed into left field, allowing him to score. Later, with two outs, Braydon Allie, Clark and Sundloff hit back-to-back-to-back singles, with Allie and Trent Jones scoring on Sundloff’s drive to the center-field warning track.

“You can always count on them,” Jason Jones said. “All summer long, the last two weeks, they’ve been clutch. It’s a good problem to have when you’ve got all those guys in the lineup. It seems like everyone’s stepping up and we’re swinging the bat really well.”

After Clark shut out the Tribe and Stansbury failed to score in the third inning, Thorpe took over on the mound for the Stallions in the top of the fourth. He induced two groundouts and a flyout to maintain Stansbury’s five-run lead, but Bountiful finally got going with two outs in the top of the fifth. With a runner on first, the Tribe got a double, a hit-by-pitch and a two-run single to cut the Stallions’ advantage to 5-2.

However, that was all the Tribe could manage. Thorpe retired the first two batters of the sixth inning before giving up an infield single, which led to Sundloff coming on in relief. Sundloff needed just three pitches to induce a flyout to center field, ending Bountiful’s threat.

Then, Stansbury’s offense erupted in the bottom of the sixth, putting the game out of reach. Nate Nunley hit a leadoff single to shallow right, and came home on Clark’s one-out triple to the right-center field warning track. Sundloff followed with an RBI double that hit the center-field fence on the fly, and speed-up runner Dak Nakken came home on a base hit by Tyler Harris.

That was more than enough for Sundloff, who needed just 10 pitches to retire the Tribe in order in the top of the seventh with a fastball that reached into the mid-90s, according to a radar gun behind home plate. Sundloff was credited with a save after throwing 1 1/3 perfect innings. Thorpe pitched 2 2/3 innings, allowing two earned runs on four hits.

At the plate, Shields was 3-for-4 with a double and a run scored, and Sundloff was 2-for-3 with a double, a walk and three RBIs.

The Stallions traveled to Bountiful on Wednesday for a game against Viewmont. They will return home to face Roy on Monday at 6 p.m., with a road game against county rival Tooele on Wednesday at Dow James Memorial Park.