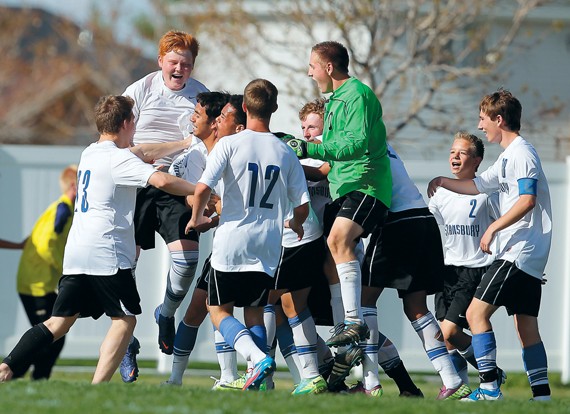 Stansbury soccer players celebrate after Armando Herrera scored the winning goal in a second overtime period Tuesday against Tooele. The Buffaloes led 1-0 most of the game before the Stallions scored their first goal at the 70-minute mark to force overtime.

When Stansbury substituted out Armando Herrera late in the game with the scored tied 1-1, Herrera shouted to his coach to put him back in because he scores winning goals in big games.

Herrera was back in the match early in the second overtime to strike from 20 yards out to give the Stallions a hard fought 2-1 triumph over their arch rivals from Tooele. Stansbury scored the winning goal playing one man down.

“I thought things were developing a little slowly on the play, but when I got past the first defender I thought to myself now is the opportunity to score and win the game,” said a smiling Herrera after the victory. “Yeah, that was me shouting to the coach earlier. I’ve scored winning goals a couple of times in club play.”

Tooele made Stansbury work hard for the overtime victory. The game was a stark contrast to the one played back on March 30 at Tooele when the Stallions led 2-0 at intermission and then buried Tooele with four secondhalf goals to win 6-0.

Stansbury threatened early and often in the first 15 minutes of the game, but Tooele kept the Stallions scoreless. Tooele goalkeeper Nathan Fisk made some outstanding saves and some of Stansbury’s shots were close enough to hit the uprights and the crossbar.

After the opening offensive flurry by the Stallions, however, Tooele started to push the ball into Stansbury territory driving the ball up the right side of the field for crosses and shots. At the 25 minute mark Tooele pushed the ball up field and got the ball in front of the goal for a few blasts at the net. Braden Eldredge passed the ball to Collin Beckstead who popped it into the net for the first score of the game.

Fisk continued his strong play in the second half fending off shots from the Stallions. Zack Sharp rifled a shot at the Tooele net that bounced off the upright. Tooele continued to pressure Stansbury too and had a pair of opportunities to go up by two goals, but came up short. Stallion keeper Kyler Clements also was solid for the Stallions. Finally, with 10 minutes left in regulation, Josh Gallegos received a corner kick from Sharp and scored Stansbury’s first goal of the game. A few minutes later Gallegos received a red card after a collision on the field in which Sharp landed on the turf and stayed down for a few minutes. The red card forced Stansbury to finish the game and overtime with one man down. Stansbury coach Brandon Andersen was exuberant after the contest and was pleased that his team picked up the victory with one man down. The coach yelled, “One man down!” two or three times in celebration after the victory.

The victory most likely locked up a playoff spot for the Stallions. Stansbury is one game ahead of Morgan for fourth place and the final playoff spot from Region 11 with a game at Morgan on Friday and a game at home on Tuesday against Grantsville.

Tooele has made a few strategy changes the last few games which have resulted in closer matches. With the exception of a lopsided loss to Ogden, the Buffaloes have played tighter games against opponents recently. They lost 2-0 to Bear River, 3-2 to Union, 3-1 to Morgan and took Stansbury into overtime. The key has been to keep fresh players on the field.

“We’ve encouraged our kids to give 110 percent as long as they can out there, but when they can’t give that effort we don’t want them out there. We want high-speed, high-intensity,” said Tooele assistant coach Cody Valdez.

Head coach Casey Walker and assistant Ricardo Gonzalez helped make the strategy change to substitute heavily to keep players fresh, Valdez said. “As coaches we can tell when somebody is slowing down out there so we bring in a substitute and when the player gets a breather we put them back in.” Tooele will seek a second win over Grantsville when they host the Cowboys on Friday. The first game between the two squads was an overtime thriller with the Buffaloes winning 1-0. Tooele closes out the season on Tuesday at Ben Lomond.