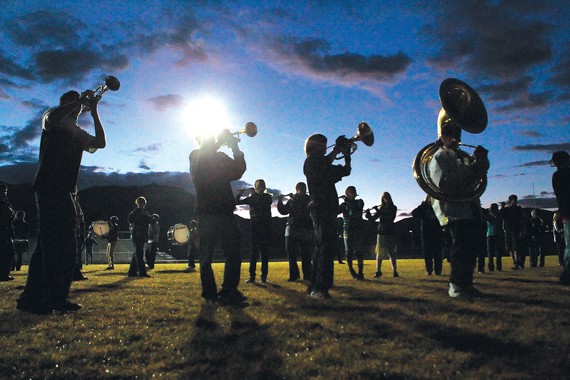 Stansbury High School marching band members practice on the school’s football field before school in 2009. Band boosters and parents would like to see a county noise ordinance revised to allow for 6 a.m. practices.

A two-year-old compromise that settled an acrimonious dispute over early morning band practice is not working, according to supporters of the Stansbury High School marching band.

Band supporters want Tooele County to amend its noise and light ordinances to allow the band to practice on the SHS football field as early as 6 a.m. The band needs the early morning practice for 10-week period from the start of school in August through the beginning of November, according Monica Parks, an Overlake resident and the parent of a SHS band member.

Parks has requested the noise ordinance requiring noise levels to remain below 55 decibels from 10 p.m. until 7 p.m. be revised to exempt noise from school band practice after 6 a.m. Parks also seeks similar changes to the county’s light ordinance to allow the lights on the football field to be turned on before dawn for band practices.

Parks’ request was heard by the Tooele County Planning Commission in a public hearing on Feb. 1. The hearing drew a crowd of over 100 people and lasted nearly three hours, with testimony from people that both opposed and favored the requested change.

Parks noted in her request that Tooele and Grantsville high schools have a long tradition of 6 a.m. marching band practices.

“Stansbury High School has tried for two years to work with local residents on the noise and lighting issues,” said Parks in her letter to the county. “The SHS band has modified practice schedules, eliminated sectional class times, and changed practice locations to accommodate adjacent residents. However, the issue is not resolved and continues to resurface.”

In February 2009, the Stansbury High School Community Council and the SHS Band Boosters petitioned the county to make a change in the noise ordinances to allow for early practice. The request was withdrawn in March 2009 after the school reached a compromise with its neighbors. The band agreed to practice inside the school until 7 a.m. and then go onto the football field. The band class was moved to first period, which allowed the band to continue marching through the first class period every other day.

But that isn’t enough time, according to Parks.

“Early morning band practice is essential to the success of the SHS band,” Parks said. “The band is made up of four different sections; percussion, brass, woodwinds, and color guard. Because percussion has it’s own competition it has a different class time and there has been difficulty making color guard and the rest of the band a class period. That means that the time the band has to practice all together on the field is approximately 45 minutes a day.”

That extra hour of practice would make a big difference, according to Ian Memmott, an SHS student who is part of the drum line.

“We have had band members that have tried out for world-class marching bands and came very close to making it,” said Memmott. “They tried their hardest but with the extra hour of practice they would have made it.”

Stansbury residents like Jack Guthrie opposed the change at the public haring.

“We were here first,” said Guthrie. “We have a pre-existing right to quiet. Making people give up their morning is absolutely wrong.”

The PTA at neighboring Rose Springs Elementary School has taken an official position opposing the change in the county noise and light ordinances to allow for early band practice, according to Tim Zeidner, a board member of the Rose Springs PTA.

“It is sad that people that oppose this change have been cast as not supporting or appreciating the band,” said Zeidner. “We want the band to be successful but we oppose this change because it is not only an inconvenience but there is plenty of research on its harmful effects. It will have known negative consequences for young families.”

Zeidner cited several studies on sleep that linked the lack of sleep and the interruption of sleep with decreased academic performance, a shortened life span, difficulty in concentration, and the inability to function optimally.

“I am very much in favor of this change,” Bryan wrote. “The band has done everything possible to try to accommodate the neighbors who live in Stansbury Park; however, the recent demand that the students not be allowed to even use the door to the band room is a clear indication that unless this ordinance is changed this small group of neighbors will continue to complain.”

“It has been said that we could practice in the parking lot,” said Blanchard. “But people want to park in the parking lot. Also, in the morning it is very icy, not large enough, lacks the proper lines, and we would have the band running into a light post at around the 35 yard line.”

After school the fields at the school are used by other groups and transporting the band to another location would include the cost of two buses and van with a trailer, Blanchard said.

After hearing from the public the planning commission held a brief discussion.

“Before Stansbury High School opened the students went to schools that allowed a 6:00 a.m. practice,” said David Gibby, a planning commission member who voted to support the ordinance change allowing the earlier practice time. “When Stansbury High School opened the students were put in a different school and the option to practice early in the morning was taken away. I support the students that are willing to be there at 6:00 a.m. to practice. We need more opportunities for our students.”

“The school has more options than the people that live next to the school,” said Bryan Coulter, a planning commission member that voted to keep the ordinance as currently written. “The school needs to recognize the band and its importance and find a solution and not dump the problem on the rest of the community.”

A similar public hearing on the ordinance change was held on Feb. 2 by the Pine Canyon Planning Commission, which also voted 4-2 to not recommend the change.

The Erda Township Planning Commission will hold a public hearing on the proposed change on Feb. 8 at 7 p.m. at the Tooele County Building.

The Tooele County Commission will then make a final decision on the proposed change at one of their meetings after Feb. 8.