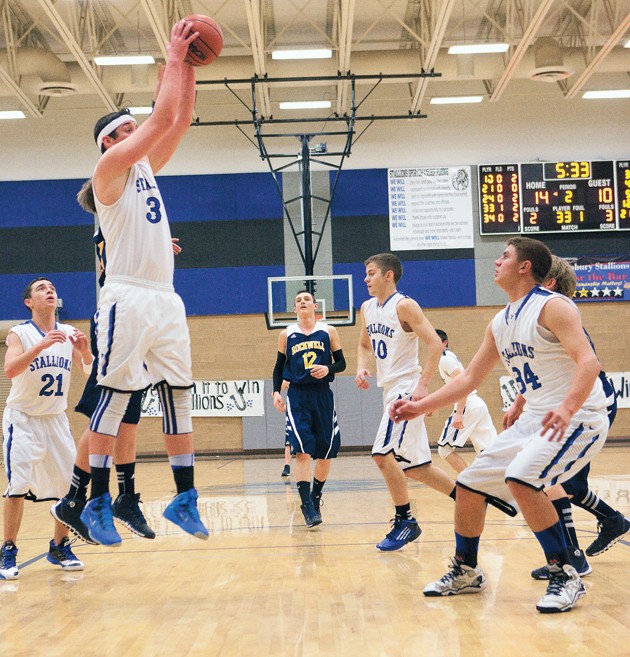 The Stansbury Stallions lost 66-38 on the road against Bear River on Wednesday. They play at home against Grantsville on Friday.

The Stallions held serve in the second and third quarters after the Bears opened the game with a 20-10 lead. However, the Bears outscored the Stallions 23-6 in the fourth quarter to finish off a 28-point win.

“They’re a great team,” said SHS head coach Rich Lakin. “I think we found out why they’re ranked fifth right now. The score doesn’t give us justice of how much better they are than us because I really don’t think they’re that much better than we are. Fortunately, we get another shot at them at home, and I think it’ll be a different story.”

Bear River led by as many as 16 points in the second quarter, but the Stallions kept within striking distance. They answered with baskets by Tom Griffith and Justin May. Griffith drove to the basket and put in a layup with Bears draped all over him. Gage Manzione then dished a pass over to May for a 3-pointer to make the score 28-17. Bear River took a 30-18 lead into halftime.

Stansbury then outscored the Bears by one point in the third quarter. Taylor Graves found Shane Andrus, who knocked down a 3-pointer with a Bear paw coming at him. Andrus was backed up enough off the 3-point line that his defender didn’t close in all the way.

Later in the quarter, Graves grabbed an offensive rebound and took the ball coast-to-coast for a basket. He followed that with an assist down to May, who was fouled. May knocked in the free throw for the three-point play.

Griffith kept the offense going when he came off a screen and hit a jump shot. Finally, Tyler Jensen weaved a pass through traffic down to Manzione, who put in the layup. Bear River answered with its own offense to take a 43-32 lead into the fourth quarter.

May finished the game as the top scorer for Stansbury with 11 points. Griffith followed him with seven points, Graves and Andrus with five each, and Manzione and Zayne Anderson with four points each.

“I think their screens were better than ours,” Lakin said. “That’s what we need to figure out. Like I said, fortunately we get another shot at them.”

Lakin said the Stallions didn’t finish with baskets after making good plays with their passing.

“I don’t think it was them that really stopped us,” Lakin said. “We were just cold — cold shooting, poor execution, and I think we’ll definitely be ready Friday.”

The Bear River game aside, the Stallions are playing with momentum after their road win against Tooele last week. With another rivalry game on Friday against Grantsville, Lakin said they know they’ll be able to keep the momentum.

The Stallions play at home Friday at 7 p.m. A win will move them into sole-ownership of second place in Region 11.