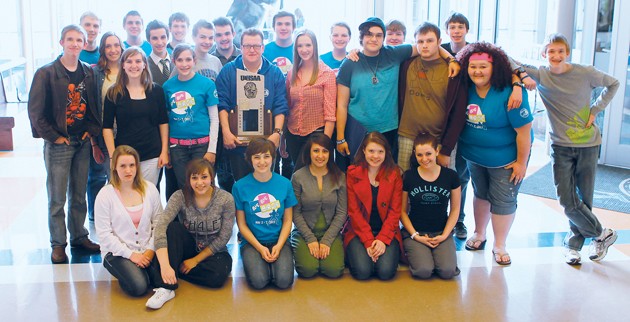 Stansbury High School drama students with their state trophy Wednesday at the high school. SHS drama earned the top prize at the 3A State Drama competition during the weekend.

Stansbury High School took the trophy and two other valley schools made a strong showing at 3A State Drama competition on April 13.

Drama students from SHS collectively won the top prize in the competition, which was held at SHS.

SHS drama director Glen Carpenter said the achievement was the result of solid performances by the students as a whole.

“I was really excited about it. I had a lot of kids who worked really, really hard this year on their scenes and monologues and songs,” he said. “I had a lot of committed kids and they were really into it.”

In addition to the state title, of the 21 individual acts in the competition, 18 got straight superior ratings, meaning judges from all three rounds of competition gave the students a “superior” rating, with the remaining three getting overall superior scores, meaning the majority of the judges’ ratings were superior. The department’s one-act play, “Almost, Maine” by John Cariani, got second place in the competition.

Tooele High School thespians also fared well, with nine of the 17 who went to state getting straight superior ratings. Scott Henrie, director of the drama department, said many of the Tooele students chose challenging, unusual pieces for the competition, including Brianna Lyman, who performed a normally humorous monologue, “I Ate the Divorce Papers,” dramatically.

“She absolutely blew the judges away because she can cry on cue and it was just very, very touching, very dramatic to watch,” Henrie said.

Henrie noted that another student, Amy Gebbes, adapted a monologue from a German play and performed it in German. Overall, he said, he felt the department did exceptionally well — the 17 who went to state this year almost doubles who went last year.

“We had a small team there, but the kids who went did really well,” Price said. “Every kid who went did extremely well. No one got lower than an excellent rating.”

Of the 15 GHS students who competed at state, seven entries got a straight superior rating, and four more got an overall superior rating. Among the superior ratings and students to go to medal rounds, Shelby Randall took third place overall in dramatic monologues for “Living.”