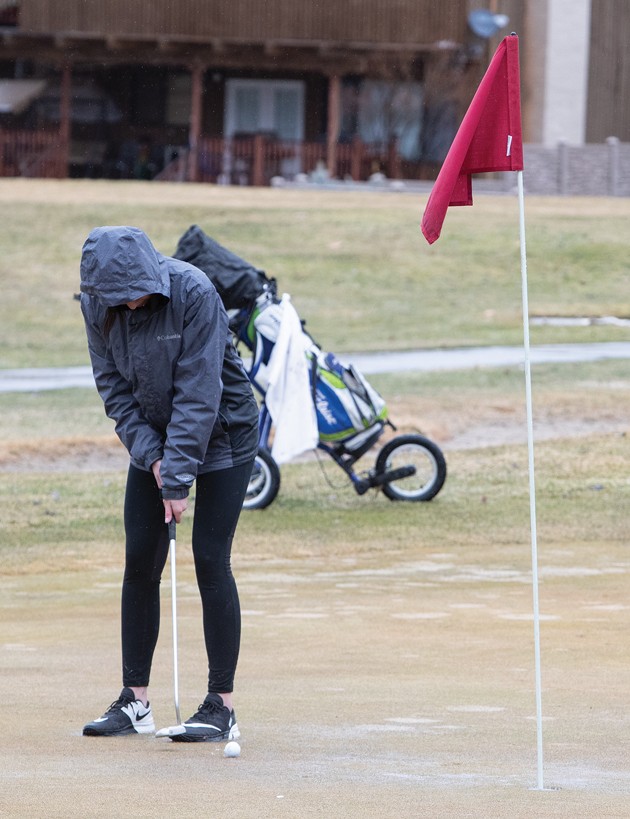 Stansbury’s Megan Paskvan rolls a putt toward the hole during a Region 11 golf match earlier this month at Stansbury Park Golf Course. Paskvan shot an 88 during Monday’s match at El Monte Golf Course in Ogden, finishing third in the individual standings and helping Stansbury to a second-place team finish.

Paskvan, Medina and Buckner all among the top 10 ♦

The Stallions posted a team score of 389, 25 strokes off Park City’s pace. Stansbury was led by Megan Paskvan, who posted the third-best individual score of the day with an 88. Madi Buckner shot a 97, tied for seventh-best, while Alexis Autry shot a 101 and Michal Broadhead came in with a 103. Shaelyn Riley (115), Emma Lizana (124), Regan Abarca (130) and Alyssa Garcia (140) also competed for the Stallions.

Tooele only had two competitors and didn’t record a team score. Emily Medina finished in a tie for fifth place with a score of 95, and Abbie McCormack shot a 130.

Park City’s McKenzie Schow finished first in the individual competition with a 78, followed by teammate Grace Donahue at 81. Juan Diego’s Shayne Farnsworth (93) finished behind Paskvan in fourth, with Medina and Bonneville’s Alissa Nash tied for fifth. Buckner and Ben Lomond’s Makel Miller were tied for seventh, and Julia Speckman of Ben Lomond finished ninth with a 98. Ben Lomond’s Emily Olsen tied with Bonneville’s Kayla Satterlee and Mikelle Burdett for 10th place, with all three shooting 99.