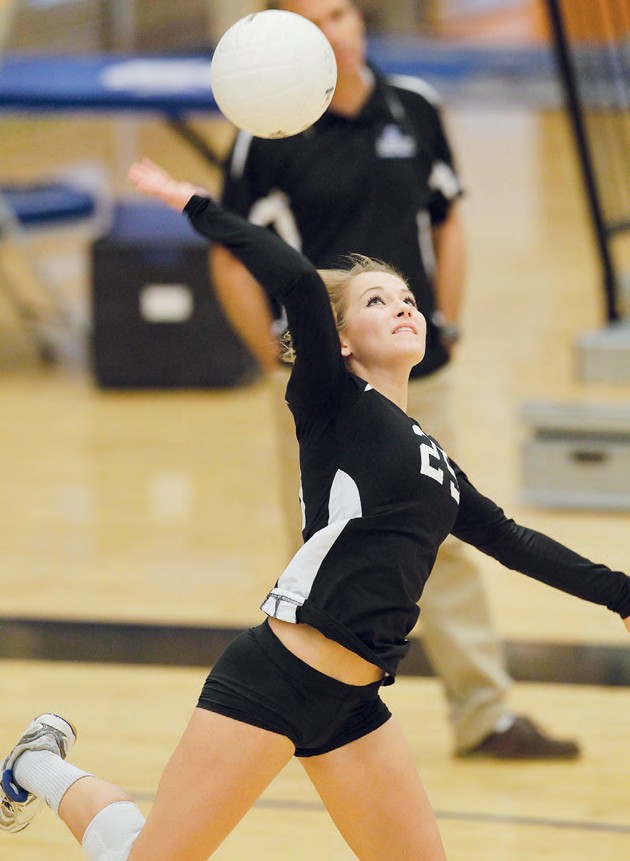 Stansbury senior Shandi Rose serves the ball Tuesday against Bear River. Rose came through with several saves in the match and helped her team to a three-set sweep of the Bears

The Stansbury High School football squad is not the only team at the school with its sights set on a region championship. The Stallion volleyball team also is on a quest to claim a Region 11 title and to do so they would need to win at Morgan.

“Whatever we’ve achieved so far this year it’s because of a total team effort,” said Stansbury volleyball coach Clint Barnes. “We’re a young team with only four seniors, but those seniors have been terrific with their leadership. This team has exceeded my expectations. We just have to keep it going and move on to our next goal which would be winning a region championship. We would need to beat Morgan.”

Barnes knows a win at defending 3A champion Morgan next Tuesday would be a tall task. But one of the team’s goals — to qualify for the state playoffs — already seems to be locked up. The Stallions are all alone in second place with a 6-1 region record. Four Region 11 teams qualify for the state tournament.

The Stallions showed how focused on winning they can be Tuesday night in a home victory over Bear River in three sets 25-9, 25-21 and 26-24.

With an easy win in the first set, and a closer 25-21 triumph in the second set, it looked liked the Stallions would definitely lose the third set when they fell behind by 13 points 7-20.

But behind the serving of senior Erika Alvey, the Stallions started to chip away at the Bears’ lead. Stansbury scored 10 straight points and trailed 17-20 when Marlee Flint smashed a kill.

The Bears got back on track with two points to go up 22-17, but by now the Stallions knew they could score points in bunches.

“When we were down by 13 in that third game I was sitting there as a coach and thinking we could just play it out and go to a fourth game. I could put some of the younger players in and they could get some experience. In a timeout, though, I told the them to  just chip away at the lead and see what happens,” Barnes said.

Only down by five points at 17-22, the Stallions were set on completing the comeback.

Libero Shandi Rose made a terrific save only inches from the floor to keep a point alive and the Stallions sliced the lead to 18-22. Later, a block from Madison Duffin narrowed the gap to 20-22 and forced a timeout from Bear River.

The Bears gained set-point at 21-24, but it was the Stallions who took control of the set and the match.

Stansbury narrowed it to 23-24 behind the serving of Duffin and Maddie Alvey. Then, sophomore Tiffany Robbins came up with a well-timed block to tie the game at 24-24. A bit of luck helped the Stallions out on the next point with a rotation infraction from the Bears to give the Stallions a 25-24 lead. Erika Alvey nailed down the match with a short shot for a winner to complete the Stallions’ 26-24 come-from-behind win in the third set.

The victory over Bears was the Stallions’ sixth win in their last seven matches.

“I was very impressed with that epic comeback in the third game. They played with a lot of fight,” Barnes said.

With a region championship as an ultimate goal, the Stallion coach knows his team will face some tough battles the remainder of the year.

“We need to take things one step at a time and keep fighting and taking care of the ball. We know that the teams we’ve defeated so far in region will be wanting to beat us the second time around. That will all start with our game against a talented Tooele team on Thursday,” the coach said.

Barnes said he is also building for future seasons.

“My big thing is I’d like to get as many kids in varsity games as possible. We have a young team so I like to give the younger kids the opportunity to go out and get court time with our four great seniors. It’s a positive thing for both the seniors and the younger players,” the coach said.

Barnes gives a lot of credit for this year’s success to senior Erika Alvey. “She is a very smart leader. Without her serving and leadership I don’t know if we can make that big comeback against Bear River,” the coach said.

The Stallions jumped out of the starting gates quickly against Bear River in the first set behind the digs of Rose and kills by Flint and Bailey Wilson. Stansbury went up 17-6 after Robbins smashed a kill down the center of the court. With the big lead, Barnes was able to bring some younger players into the contest including freshman Jessica Bassett and junior Jessica McCubbins. Stansbury went on to win the set 25-9.

Bear River jumped out to an early lead in the second set, but the Stallions caught them to tie at 7-7. The teams continued to trade points and the set was tied at 16-16 when the Stallions made a move. Wilson and Robbins put together back-to-back kills to give Stansbury a 19-16 advantage. Stansbury led 22-19 behind winners from Flint, Erika Alvey and Duffin. Flint registered another kill late in the set and the Stallions prevailed 25-21.

Stansbury has five more matches on the region schedule starting with Tooele tonight, at Morgan on Tuesday, Ogden at home Oct. 9, Grantsville at home Oct. 11 and at Ben Lomond on Oct. 16.