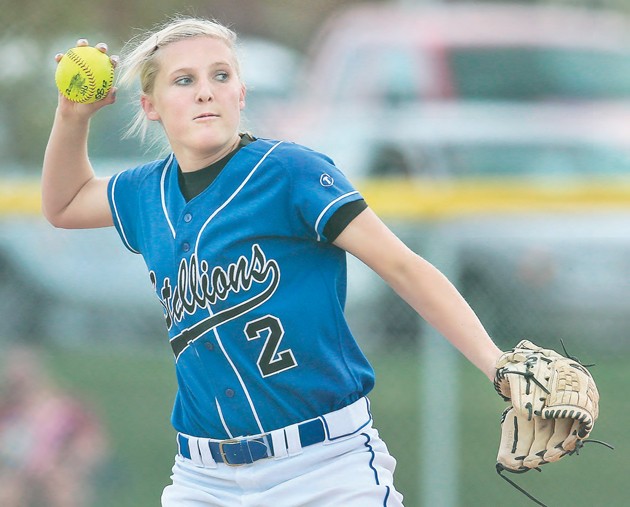 Stansbury shortstop Lindsay Guymon throws the ball to first base Wednesday against Grantsville. The Stallions piled up 11 runs on the Cowboys in a five-inning game.

When it comes to softball games between local high schools in the valley the home team has been coming out on top. Stansbury kept up with the trend by pummeling Grantsville 11-1 in five innings in Stansbury Park Wednesday afternoon.

Stansbury used a six-run third inning to pull away from the Cowboys and pick up the important Region 11 victory. “When we had runners on base we did a good job of getting them in and we scored in every inning,” said Stansbury coach Bridget Clinton. “We have had games in the past where we have left runners on base and we have been working on that in practice.”

Janessa Bassett led the way for Stansbury by slapping three singles while scoring twice and knocking in a run as well. Kilee Christiansen also came up huge with a two-run double in the fourth to put Stansbury in a position to end the game early the next inning. Grantsville could only muster three hits off Stansbury’s Katelyn Robinson but Amy Matthews did have an RBI double in the first inning. Things didn’t start out too bad for Grantsville as they came out swinging in the first inning. Lola Williams walked with one out and reached second on a ground out. Matthews was able to knock in Williams with a towering double to left to give the Cowboys a 1-0 lead in the middle of one.

Stansbury did well to manufacture a run in the bottom half and didn’t trail for long. Beth Chipman started the game by getting hit by a pitch and then made her way to third on a ground out and an error. Chipman later tied the game at 1-1 when she crossed the plate after a passed ball.

Looking for the lead in the second, Elise Sutherland was awarded first base for Stansbury on an illegal pitch and then made her way to second on a ground out. After scoring the game-tying run in the first, Chipman placed a soft infield hit down the first base line that was enough to score Sutherland for a 2-1 lead.

Stansbury blew the game open in the third when Bassett singled to begin the inning and Robinson followed with a triple down the left field line for a 3-1 lead. Later in the inning, Lindsay Guymon brought in a run with a bases-loaded walk. A costly Grantsville error with the bases loaded scored Robinson, Abby McIntyre and Karlee Manzione for a 7-1 lead. Bassett capped the inning with a RBI single to the left side of the infield for the 8-1 lead after three.

After scoring in the first inning, nothing went right offensively for Grantsville. The Cowboys got runners in scoring position in the second and fifth but nothing came of it. Stansbury just kept pouring it on in the fourth when Manzione reached on a fielders choice and Sutherland singled while Jacelyn Kaufman walked to load the bases. Christiansen brought in two with a double down the third base line for the commanding 10-1 lead after four.

Looking to end the game early, Bassett singled to start the inning for Stansbury and then stole second and made her way to third due to an error on the play. Bassett later scored the game-winning run on a Grantsville error to close out the 10-run victory.