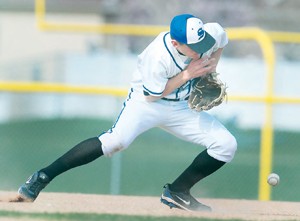 Stansbury’s Cody Barkdull reaches for the ball after it bounces off of his shoulder in a game against Grantsville on April 10. The Stallions blasted Morgan 10-1 on Friday to improve their region record to 6-0.

It didn’t seem to bother Brek Bentley on the mound that the Stansbury offensive support was slow to show up. After Morgan scored a run in the first, Bentley shut down the Trojans for six consecutive innings Friday afternoon in Morgan.

With the pitching of Bentley going just fine, the offense finally showed up in the fourth inning and Stansbury turned a close game into a 10-1 victory and gave the Stallions a flawless 6-0 record after facing each team in region once.

Bentley only allowed three hits in the victory and struck out 13 batters. The first three hitters for Morgan earned all the hits. From the fourth batter on down to the ninth, Bentley shut them down to hitting 0-for-15 with 11 strikeouts.

“Our pitchers have just been doing extremely well recently and they are throwing strikes,” said Stansbury head coach Ray Clinton. “I thought we had pretty good swings at the ball all game and we picked up our runs in the later innings.”

Stansbury was the opposite in hitting as the bottom of the order helped the Stallions along offensively. Filip Anderson led the way with a pair of doubles and a single in going 3-for-4 while scoring twice and knocking in a run. Tyson Haddon, Jesse Clingman and Jarrett Anderson all had multi-hit games for Stansbury in the victory.

Morgan got the better of Bentley in the bottom of the opening frame as Colby Skinner started the game with a single and then made his way to third on a stolen base and a ground out. Skinner later scored on a Stansbury fielding error to give the Trojans a 1-0 lead after one. Stansbury got runners on in the first and second innings but it took until the fourth to get runs on the board with two outs already in the inning. Jesse Clingman started it with a single and brother Trevor followed with a walk. Filip Anderson knotted the game at 1-1 with a double down the left field line.

Jarrett Anderson followed with a two-run double to left-center, just out of reach of a leaping shortstop, to give Stansbury a 3- 1 lead in the middle of four.

Stansbury added another run in the fifth when Wyatt Branch reached base and later stole second. After reaching third on a Haddon single, Branch made his way home on a passed ball for a 4-1 lead.

With Bentley cruising along on the mound for Stansbury, the Stallions put the game far out of reach in the top of the seventh inning. Matt Lindsley started it by drawing a walk and Branch followed with a single. Haddon sliced a double to right to bring in a run and increase the lead to 5-1.

Marcos Chacon brought in a pair with a single through the left side of the infield and then Jake Witkowski was later able to score on a double steal to make the game 8-1.

Jesse Clingman added an RBI double to left and then Jarrett Anderson capped the scoring with a single sliced to right field to give Stansbury a 10-1 lead in the middle of seven.

Bentley struck out the side in the bottom half of the seventh to secure the victory and help Stansbury sweep through the first half of the Region 11 baseball season.

Stansbury will make up a game that was rained out last week with Ben Lomond on Monday in Stansbury Park at 3:30 p.m.