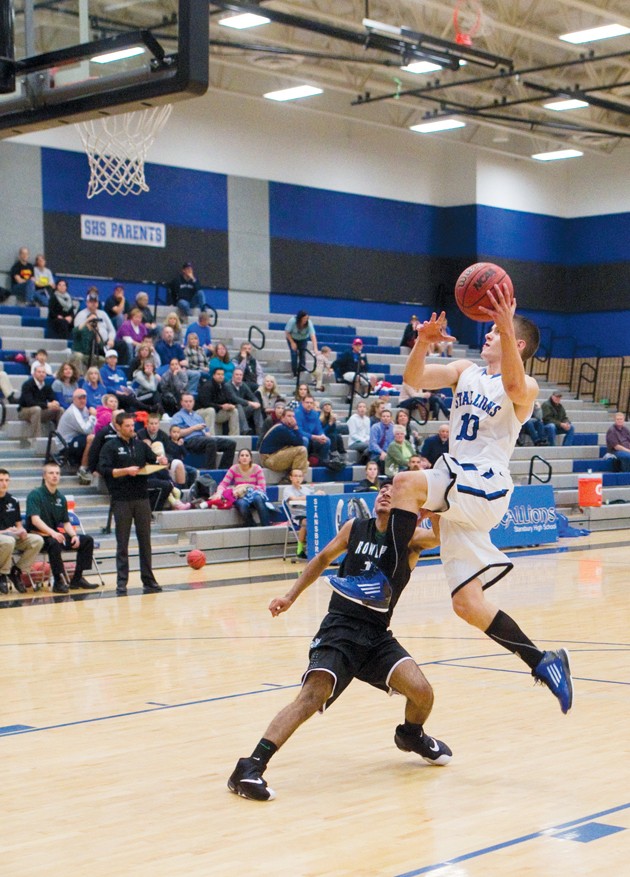 Taylor Graves goes up for a shot in a game against Rowland Hall on Dec. 3. Graves scored nine points in Stanbury’s victory over Uintah on Friday.

Stansbury didn’t play the perfect game, but it did create turnovers in a perfect spot to make a come-from-behind victory.

The Stallions trailed Uintah 42-37 with 2:17 left when Stansbury started to jump into passing lanes. Tom Griffith stole the ball and made a fast-break layup to give Stansbury a 44-42 lead with 1:09 left.

It was a lead that the Stallions wouldn’t relinquish as Shane Andrus hit two free throws at the end to give Stansbury a 48-45 victory in Vernal Friday night.

Griffith was on fire early as he nearly hit every shot he threw at the basket in the first quarter to score 14 of his game-high 22 points to lead the way. Justin May also reached double figures in the win by scoring 13 points.

Stansbury could only get one player to score in the opening quarter but it worked out well for the Stallions. The reason for that was because that one player was Griffith, who scored all 14 of Stansbury’s points. Griffith hit four 3-pointers in the quarter, which helped the Stallions jump out to a 14-8 lead after the first.

Griffith cooled off in the second and Uintah cut into the Stansbury lead. The Utes ran off 10 consecutive points in the quarter, led by Haden Bunderson and CJ Baum scoring four each to give Uintah a 21-17 lead with 2:44 left in the half.

May hit a big 3-pointer for Stansbury and Taylor Graves nailed a couple of free throws in the closing minutes of the half but a basket from Bunderson ensured that Uintah held a 27-24 lead at the break.

Stansbury’s defense made all the plays in the third quarter and only allowed five points to Uintah while creating a number of turnovers. May scored six points in the quarter but the Stallions didn’t grab a lead in the third until May made a basket in the post with less than a minute. May’s basket gave the Stallions a 33-32 lead heading into the fourth.

The Stallions went on a scoring drought again to begin the fourth and Uintah took advantage. The Utes scored the first seven points of the fourth with Bunderson scoring the final four and giving Uintah a 39-33 lead with 4:11 left.

That is when Stansbury flipped the script and starting taking the ball away from Uintah. Stansbury scored seven straight points of their own capped by a fast break layup by Griffith for a 44-42 lead.

Griffith made another layup for a three-point lead and Andrus sank both of his free throws to make the score 48-45. On Uintah’s final possession with 17.9 left it was only fitting that Stansbury again created another turnover to seal the victory.

Stansbury will next host Summit Academy Tuesday at 7 p.m.