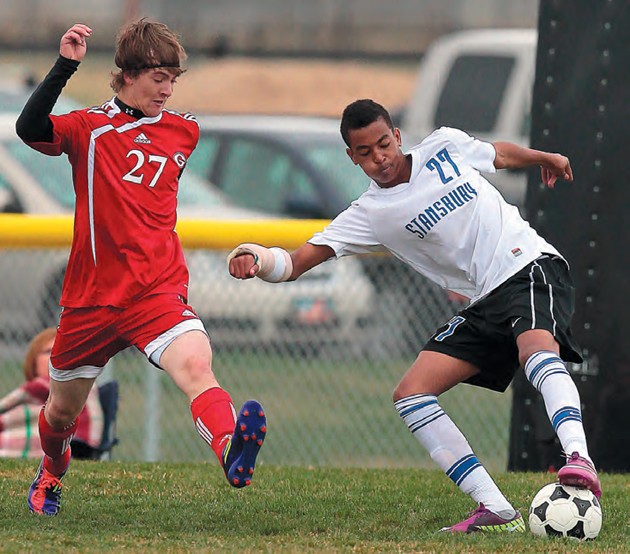 Grantsville’s Colton Barney defends against Stansbury’s Jara Eshete Wednesday. The Stallions scored six goals in the second half to defeat the Cowboys 9-1.

March 29, 2012
Stansbury roughs up Cowboys on the pitch

After clinging on to a 3-1 lead at the half, Stansbury didn’t sit back against Grantsville in the final 40 scheduled minutes. The Stallions instead turned in a strongly executed offensive half.

Stansbury poured it on Grantsville with six goals in the second half and a goal by Darius Johnson in the 71st minute closed the game early and gave the Stallions a 9-1 victory Wednesday afternoon in Stansbury Park.

“We played well right at the beginning but then we slowed our pace a little in the first half,” said Stansbury coach Brandon Andersen. “We talked about our game plan at half and how we were trying to set the stage for what we wanted to accomplish.”

Josh Gallegos led the scoring barrage for Stansbury by earning a hat trick with three goals, with two coming in the second half. Zack Sharp and Jonny Calderon each scored a pair of goals for the Stallions. Grantsville did manage a goal in the first half when Joseph Lopez scored in the 34th minute to briefly get within one goal in the first half.

Grantsville didn’t have many opportunities to score in the first 20 minutes but Sam Williamson was able to bang a shot off the cross bar from about 12 yards out.

Stansbury finally cashed in on all their chances in the 18th minute when Sharp broke free and deposited a goal into the right side of the net for a 1-0 lead. Five minutes later, Gallegos doubled the Stansbury lead when he got inside of his defender on a corner kick and chipped it into goal for a 2-0 advantage.

Grantsville caught a little momentum in the 32nd minute when they had a few chances with the Stansbury defense. In the 34th minute, Williamson sent in a dangerous corner kick that, after being deflected a few times, was caught up to by Lopez for a close-range goal to make the score 2-1.

Stansbury didn’t settle for a one-goal lead in the first half as Calderon blasted a shot from about 15 yards out that deflected of a Grantsville player and into the net for a 3-1 lead in the 36th minute that held up until halftime.

For as good as the first half was for Stansbury, the second half was about three times better. With six goals, Stansbury put Grantsville away. Gallegos started the scoring in the 42nd minute when his shot was deflected in off of a Grantsville defender for a 4-1 lead. Gallegos struck again a minute later off of a corner kick for a 5-1 lead. In the 49th minute, Calderon scored on a penalty kick that was initially saved but them deposited into the net on the put back.

Sharp blasted home a goal from a free kick about 25 yards out to give Stansbury a 7-1 lead in the 53rd minute. Braden Bouwhuis and Johnson closed out the game with a goal each to end the game nine minutes early by the mercy rule and gave the Stallions a eight-goal victory.