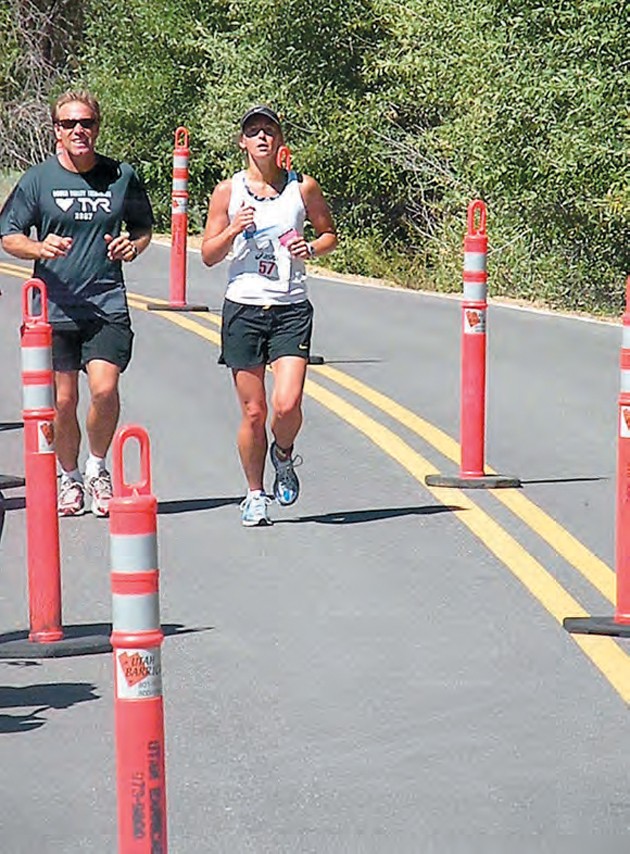 Clint Barnes and Julia Barnes run through barracades at the Tri-Utah race at Jordanelle Reservoir in Aug. 2010. Clint Barnes started the Stansbury Park Running and Triathlon Club as a way to increase the community’s participation in races. courtesy of Clint Barnes

Stansbury Park resident Clint Barnes has spent years running and participating in triathlons to stay in shape. And for the last two years, he’s been working to make that love of fitness go community wide.

Barnes is a volleyball coach at Stansbury High School and founder of the four-year-old Stansbury Park Track Club for kids. Two years ago he started another group — the Stansbury Park Running and Triathlon Club — to increase the community’s opportunity to participate in races and triathlons here.

“I put it together because I got tired of spending a lot of money traveling across the state to do races,” he said. “We have great areas to run and bike out here, so instead of spending money to go elsewhere, it’s nice to do a little more right in town.”

The idea of creating more races locally was coupled with the idea that people in Tooele County needed more opportunities to get in shape, Barnes said.

“If we can encourage people to get out and do something healthy, it’s going to be evident,” he said. “If the adult population can get out, then our youth won’t have the same problems [with obesity]. It all starts with the parents who can get out and be a little more fit.”

The group has had a slow start, Barnes said, and for the last two years has had only about 10 or 15 members. During winter the group doesn’t meet or train for races and triathlons. This year, Barnes said, the group will start meeting around the first of April, as soon as he gets a schedule put together.

Barnes, who has been participating in triathlons for a decade and running for two decades, said many of the races the group organizes, such as the Stansbury Triathlon, are hosted in Stansbury Park. But the club has also completed races and trainings at Deseret Peak Complex and Pratt Aquatic Center.

“We try to keep our races and training local so residents of Stansbury and Tooele can utilize them,” Barnes said. “We try to do 5Ks and triathlons throughout the summer. We typically do about four or five triathlons a year.”

Barnes said the club trains together weekly, and tries to set up different times to swim, run or bike together throughout the spring, summer and fall seasons. He said because some members of the club have different work schedules, they try to plan several small group training sessions.

“We try to create a bond within the club and community by having a group that can help inspire each other to reach their goals,” he said. “Having small groups provides extra motivation. We have a lot of beginners and a few of us who have been doing triathlons for a few years. We’ll get the advanced athletes involved in the running, swimming and biking who can help others who are working into the sport. It’s nice to have the experienced ones to teach the others.”

Barnes said he understands that Tooele County is known for having the highest obesity rate in the state — 30.7 percent according to the Centers for Disease Control and Prevention — and joining a running and triathlon club can be intimidating. However, he said anyone in the community who is willing to try can become a member.

“Sometimes people get intimidated by a 5K, 10K or triathlon, but anybody can accomplish anything,” he said. “You just have to set goals. One of our goals is to get people to say ‘yes I can’ and accomplish hard things. I want to help make our community bigger and stronger, and make Tooele County the fittest community in the state.”

Those who want more information, or who are interested in joining the Stansbury Park Running and Triathlon Club, can visit oquirrhmtnsports.org for a race schedule and membership fee information.