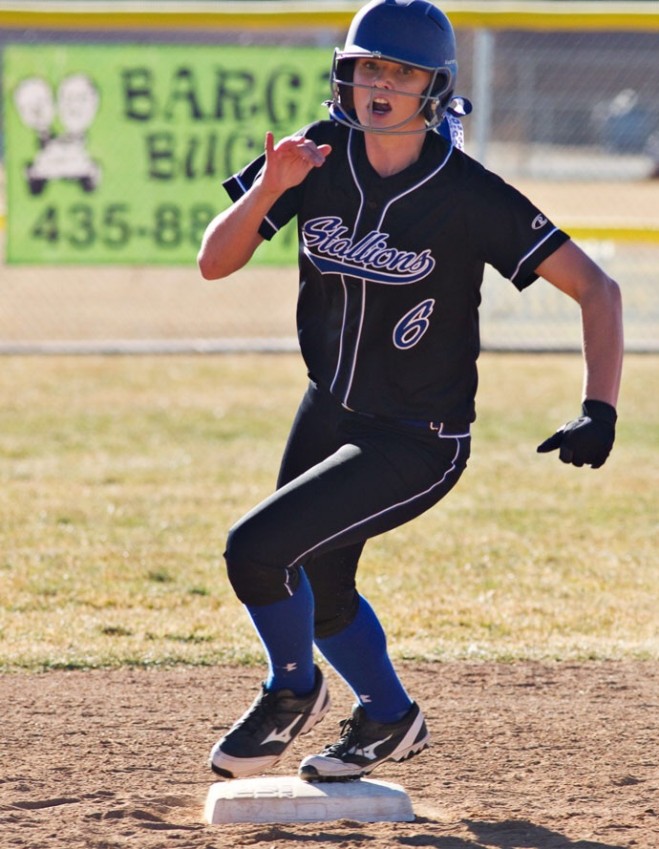 Francie Aufdemorte/TTB Photo Stansbury senior Kilee Christiansen rounds second base en route to a triple during the sixth inning of the Stallions' 12-2 win against Davis on Tuesday at Stansbury High School. Christiansen went 3-for-4 and scored three runs in the victory.

It may have been just its second game of the season, but the Stansbury softball team’s offense already appears to be in midseason form.
The Stallions pounded out 14 hits, six of which went for extra bases, and pitcher Kimbri Herring struck out 11 batters in a 12-2 win over Davis on Tuesday that was shortened to six innings by the mercy rule.
“We hit the ball so hard,” Stansbury coach Bridget Clinton said. “Davis is a good team, and they made a bunch of great plays, but we just hit the ball hard and Kimbri dominated early in the game.”
The Stallions (2-0) got off to a quick start, scoring four runs in the bottom of the second inning against Davis starter MaKenna O’Brien.
Herring led off the inning with a double to left field, and scored on Kilee Christiansen’s base hit up the middle. Jade Callister followed with a single, setting the stage for Kaeley Loader’s two-run double to left.
“She’s just crushing the ball,” Clinton said of Christiansen. “Kimbri hit the ball good today, Jade hit the ball good today — everybody hit the ball good today.”
O’Brien was briefly shaken up after being hit by a comebacker off the bat of Kambree Christiansen, and went on to issue a bases-loaded walk to Anjalee Batchelor that allowed Loader to score.
Mia Cullimore replaced O’Brien in the circle for the bottom of the third inning for the Darts (0-1), but the pitching change didn’t seem to slow down the Stallions at all. Kilee Christiansen led off the inning with a base hit to right-center, and after Callister drew a walk, Maddie Riolo hit an RBI single up the middle to give Stansbury a 5-0 advantage.
Cullimore’s fortunes were no better in the fourth inning, with freshman Lindsey Allie leading off the inning by reaching base when the Darts couldn’t handle a tough throw to first base. Batchelor followed with her second walk of the afternoon, and Callister hit a two-run triple two batters later to extend the lead to 7-0.
Meanwhile, Herring rolled for Stansbury. Through the first four innings, the senior allowed just two hits, one of which was canceled out when Kilee Christiansen made a perfect throw from center field to third baseman Alyssa Guymon to snuff out Abbie O’Brien’s attempt to turn a double into a triple. Herring had eight strikeouts in the first four innings as well.
“Everybody was doing their job to keep the pressure off Kimbri,” Kilee Christiansen said. “We have each other’s backs and we’re there for each other.”
The Stallions continued to rack up hits against the third Davis pitcher of the afternoon, Eastyn Carlson. Guymon hit a two-out triple to center and later scored on a wild pitch in the bottom of the fifth to give Stansbury an eight-run lead. and Callister and Kilee Christiansen hit back-to-back triples as part of a four-run effort in the sixth inning that brought the game to a close.
Abbie O’Brien hit a triple in the top of the sixth for the Darts, scoring on an RBI single by Mycal Burch to end Herring’s shutout bid. Burch later scored on a base hit by Carley Croshaw.
Callister went 3-for-3 with two triples, two RBIs and two runs for Stansbury, while Kilee Christiansen was 3-for-4 for the second consecutive game.
“It’s always good to come out and start the season with two wins,” Clinton said.
Stansbury now will head to St. George for a challenging two-day tournament. The Stallions will face Spanish Fork, Pleasant Grove and Oaks Christian (California) on Friday, with games against Salem Hills and Murray on Saturday.
“We’re playing some good teams,” Kilee Christiansen said. “It’ll be fun. It will show us where we’re at for sure.”
dvaughan@tooeletranscript.com