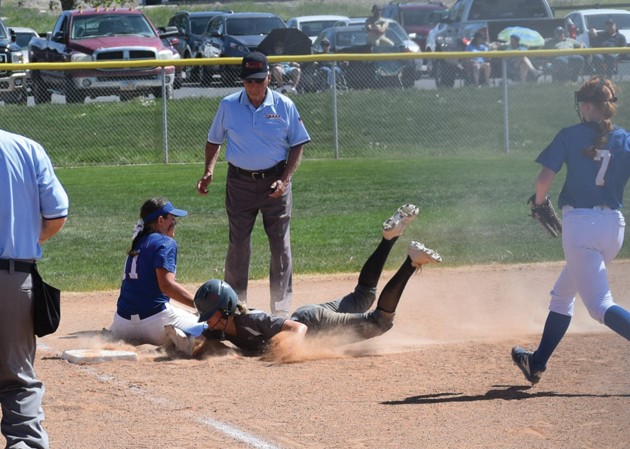 Stansbury and Tooele advanced in the 5A state softball playoffs Monday with victories over Timpview and Orem. The Sallions blasted Timpview and Tooele did the same to Orem.

The 10th-seed Stallions defeated Timpview 12-5 at Stansbury Monday to complete a two-game sweep of the 23rd-seed Thunderbirds. Stansbury won the first game on Saturday 6-1.

Tooele had an easy time during the first round at home on Friday with a 16-1 three-inning victory over Park City. The Buffs entered the game as the 20th seed and Park City was 29th.

Tooele blasted 14 hits in the three innings with Sadie Baker knocking two doubles and Caitlyn Marshall blasting a home run. Aubrie Hansen picked up the win from the circle.

The Buffaloes continued their solid play on Saturday and Monday at 13th seed Orem.

On Saturday, the Tigers scored twice in the first inning, and the Buffaloes trailed 2-0 after four complete innings, but got three runs in the fifth and one more in the sixth to win the game 4-2. Tooele only allowed three hits in the game.

Tooele pounded Orem on Monday 12-0 to advance to a Super Regional Best of 3 series at No. 1 seed Spanish Fork (21-4) on Thursday. It will be Spanish Fork’s first game in the tournament after byes in the first round and the Regionals. Thursday’s game is slated for 4 p.m. and Friday’s game starts 3:30 p.m.

The Stallions led 4-0 after two innings and added a run in the fourth and another in the sixth to lead 6-0 headed to the top of the seventh when the Thunderbirds scored their only run of the game.

McKinzy Lawson went 3-for-3 at the plate with three singles and one RBI. Kaycee Thornock smacked a double and recorded two RBIs. Tess Baker and Tiara Jones each pounded two hits, and seven players ripped hits in the game.

The Stallions pounded 19 hits and scored runs in five of six innings on Monday to advance to the Super Regionals.

Stansbury loaded the bases in the first inning on singles by Kaycee Thornock and Hicks, but scored only one run on a sacrifice fly to center by Jones.

Stansbury added five more runs in the second inning with a two-out rally. The speedy Rylan Hecker doubled to left and Tessa Baker reached first. Thornock drilled a shot to the left-center gap to score Hecker and Baker to make it 3-0. Lawson followed with an RBI double to deep right-center, and Hicks followed with a bloop single, Jones pounded an RBI single, and Maylee Didericksen singled.

When the dust settled, the Stallions led 6-0 after two innings.

The Stallions pushed the lead to 8-0 in the third with a pair of runs on RBIs from Thornock and Lawson.

Timpview rallied for five runs on five hits in the top of the fifth to slice the lead to 8-5. Jones replaced Hicks in the circle and got a pop out to stop the bleeding.

Stansbury was quick to respond in their half of the fifth with three runs. Hecker beat out an infield single, Baker bunted for hit, and Thornock hit a bloop single to load the bases with one out. Lawson singled to center to score two runs, and a single by Madison Hicks gave the Stallions a third run in the inning.

Kaitlyn Hicks singled to open the sixth and eventually scored after a pair of Timpview errors and a sacrifice grounder by Hecker.

Jones finished the final 2 1/3 innings in the circle allowing no runs on no hits with four strikeouts.