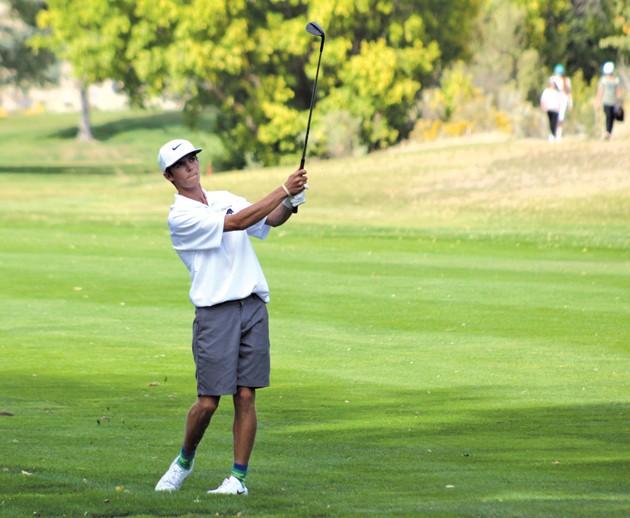 Stansbury’s Braydon Griffith hits a shot at the 5A state golf tournament. He shot a 36-hole total 151, 7-over-par.

Stansbury High School’s boys golf team won the Region 7 title with an undefeated record in region matches, but failed to qualify on Monday to compete in the second day of the 5A state tournament at The Oaks at Spanish Fork.

Region 7’s other automatic qualifier, second-place Cottonwood, also failed to make the cut after the first round of the state tourney. Cottonwood finished slightly ahead of Tooele High in the final region standings. The top two teams in each 5A region were allowed to compete as teams at state.

Stansbury senior and region medalist Braydon Griffith did make the cut after the first day with a 1-over-par 73. He then shot 78 the second day for a two-day total of 151, 7-over-par. His 151 was good enough for 14th place individually in the 5A the field of 113 golfers.

Stansbury coach Jeremy Alverson said competition was difficult in the 5A division.

Jackson Rees of Spanish Fork shot 11-under-par to win the individual championship. Three golfers shot 3-under, one shot 2-under, and one finished even. Thirteen more competitors finished  9-over or less.

“The second day I went out with Brayden’s group with three other region champions. They all could hit greens in regulation, but the greens were extremely fast and that made the course extremely tough. It was a metal grind for everybody. It made it difficult to putt aggressively,” Alverson said.

“We had a lot of firsts this year. It was our first region championship, first undefeated region season and the first time we were able to shoot 300,” the coach said. “It will be hard to replace Braydon, our region medalist, but we have his younger brother Jack back who finished fourth at region as a freshman. We had two seniors and four underclassmen in our group of six.”

The coach also expressed thanks for the support of parents and fellow Stallion golfers both boys and girls at the tournament. “We probably had about 40 people out there following us on the course,” he said.

Stanbury’s Blake Mehler finished 9-over-par after one round, Jack Griffith 12-over, Ty Taylor 14-over, Kyle Hanson 18-over, and Jordan Furuya 27-over.