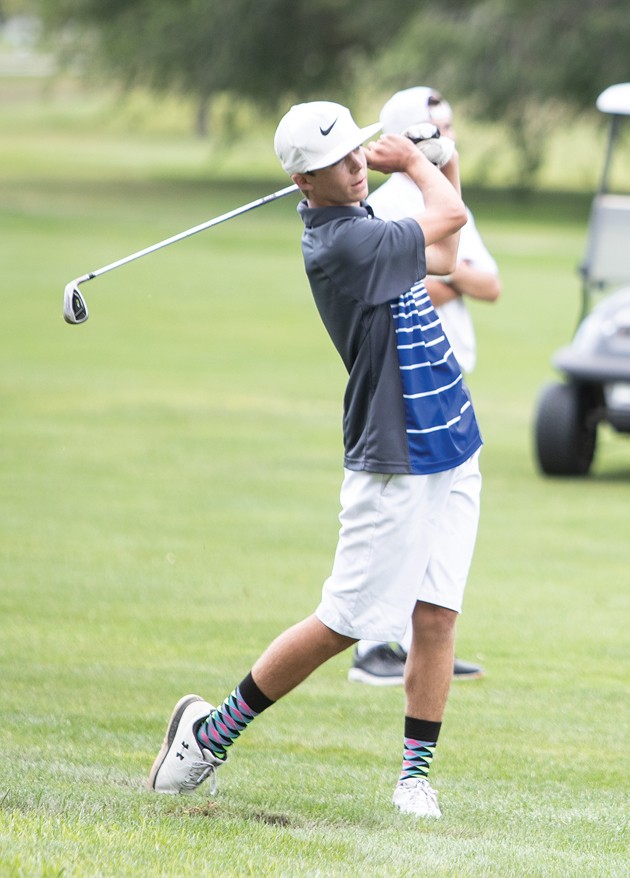 Stansbury’s Braydon Griffith hits his approach shot on the 18th hole during Thursday’s Region 10 golf match at Stansbury Park Golf Course. Griffith shot 3-under par 69, finishing as the only player under par to win the match by four strokes.

Stansbury’s Braydon Griffith certainly knows his way around the Stansbury Park Golf Course, and he showed off that course knowledge in a big way during Thursday’s Region 10 golf match.

Griffith shot a blistering 3-under par 69 over the 18-hole round, the only player to break par during the round. He finished four strokes ahead of runner-up Caden Dunn of Cedar Valley, with Tooele’s Ashden Morrill another stroke back in third place. Cedar Valley’s Jackson Shippen shot 75 and finished fourth, and Stansbury’s Peyton Thevenot tied with Uintah’s Kamon Anderson and Ryan Abplanalp for fifth place at 78. Tooele’s Luke Begnaud and Ogden’s Coltin Powell tied for eighth at 79, and Tooele’s Cache Holmes and Cedar Valley’s Dallin Weierholt shot 80 and tied for 10th.

Cedar Valley edged Stansbury by four strokes for the team victory (309-313), with the match coming down to each team’s fourth-best score. Cedar Valley’s Anthony Price tied for 12th place with an 81, and Stansbury’s Ty Taylor tied for 18th with an 85. However, the Stallions were able to place all eight of their varsity golfers in the top 32 overall.

Tooele was just five strokes behind Stansbury at 318. Caleb Buell posted the Buffaloes’ fourth-best score, tying with Taylor for 18th at 85.

Uintah was fourth with a team score of 321, three strokes behind the Buffaloes. Trae Elison tied for 12th with an 81 and Trey Briggs was tied for 16th with an 84 for the Utes.