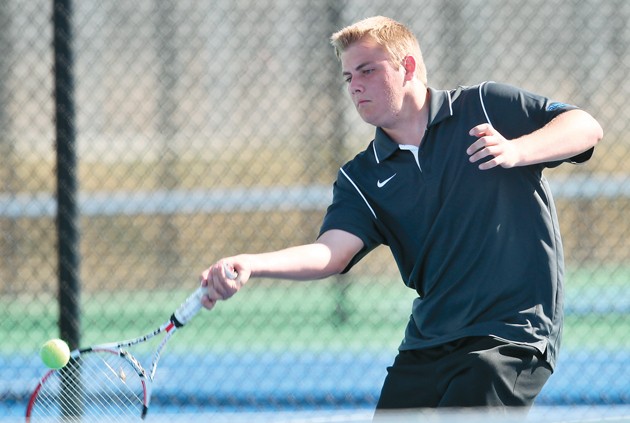 He had won the first set against Tooele’s ace Julio Aroyare 7-5 in a region match Thursday at Stansbury High School.

But after that opening set victory, the Colombian foreign exhange student fought back to win nine of the next 13 games. Tooele’s top player won the second set 6-3 and led 3-1 in the third set.

McBride continued to persevere despite trailing in the final set. He reeled off four straight games to go up 5-3.

Aroyare wasn’t finished as well with both players battling hard with long rallies. The pair fought to the bitter end.

Aroyare came back to break McBride’s serve and win his own serve to tie the third set at 5-5.

McBride held it together in the 11th game of the third set to break Aroyare. The winning point of the 11th game came on an overhead kill by McBride — a shot that had haunted him some throughout the match. McBride would gain advantage, but then miss an overhead.

“I had some tougher physical matches down in St. George, but this was the toughest match for me mentally,” McBride said. “My main goal was just to stay focused, and remember my basic training.”

It was the first competitive match of the season for Aroyare, who had missed some practice after a trip to Hawaii.

“This was my first high school match,” Aroyare said. “I started playing three years ago at a tennis club in Colombia and have never played a high school match. I’m not used to this surface.”

Aroyare is used to playing on clay, but here the teams play on concrete.

The Stallions swept the Buffaloes 5-0 in the match. Stansbury won another three-setter at second singles with Jake Hardy defeating Ivan Gonzales 6-4, 3-6, 6-3.

Stansbury plays at Morgan on April 9 and Tooele plays at Grantsville on the same day.