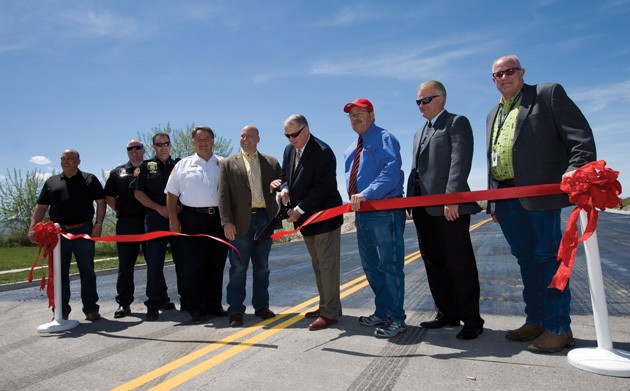 The final leg of Village Boulevard in Stansbury Park is open and officials snipped a symbolic red ribbon Friday to commemorate its completion.

Village Boulevard, which is a major thoroughfare through Stansbury Park, now links the community with SR-138 to the north and SR-36 to the east. The new access to SR-138 gives residents — and public safety officials — an additional option for entering and leaving the community.

“I’m delighted it was done early rather than in two to three years,” said Tooele County Commission Chairman Wade Bitner. “We have needed this to be done for quite some time.”

“We cover quite a big area west of Stansbury and it will probably save us five minutes,” he said. “It’s a big improvement in access.”

Construction on the estimated $1.9 million project began last summer with installing water and sewer lines. Bitner said last year the plan was to have most of the road finished by the end of 2015, but due to weather and other factors, it was finished this spring.

The state had budgeted a reported $850,000 to help pay for the project — but not until 2018. Wanting to ease traffic congestion and improve public safety access now, the county commission partnered with EnergySolutions and developer Boyer Corporation to finish Village Boulevard years ahead of schedule.

Last year the commissioners approved a memorandum of understanding with EnergySolutions for the company to pre-pay $1.7 million in mitigation fees to the county. County officials used those fees to help pay for Village Boulevard.

The prepayment will be a credit against mitigation fees owed by EnergySolutions for the years 2017 through 2020, in the amount of $425,000 per year, according to the agreement.

The advance payment of mitigation fees allows the county to go ahead with construction of Village Boulevard using funds from the unrestricted mitigation fees fund, Bitner said last year.

The partnership also includes the Boyer Corporation, which owns and plans to develop property between the end of Village Boulevard and SR-138, giving the county $200,000 now and another $850,000 in five years for the project.

When the state comes through with its $850,000 and the Boyer Company makes its $850,000 payment, Tooele County will put the money into the mitigation fee fund, Bitner said last year.

After Friday’s ribbon-cutting ceremony, Bitner said the contractor will return in a few weeks to install new concrete collars around manhole covers. After that, a final layer of sealer will be applied, plus new striping.