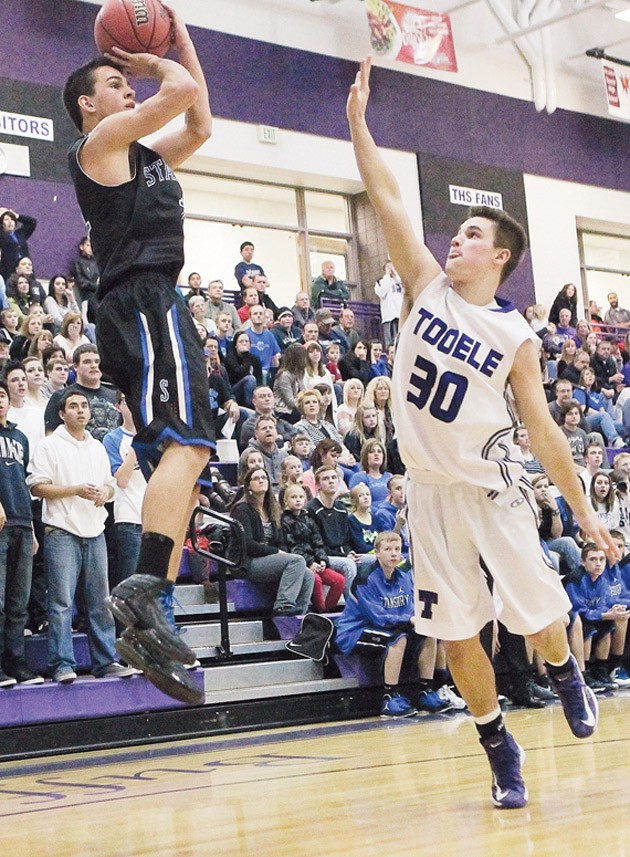 Senior guard Ryan Robbins spent the holidays sick and having to miss practice and games, so when he came out with an 18-point performance that led the Stansbury Stallions to a 67-55 win over Tooele, even his coach was surprised.

Stansbury coach Ryan Harris said he didn’t know what to expect from Robbins because of the missed time, so his performance against the Buffaloes was like found money.

Most of Robbins’ damage came in the second half when Stansbury (5-8, 1-2 in Region 11) trailed Tooele (2-11, 0-3 in Region 11) 29-20 at halftime. The Stallions slowly chipped away at the lead and finally took the lead with 2:36 remaining in the third quarter on a 3-pointer by senior forward Stone Tia for a score of 43-42. Tooele recaptured the lead, but with one minute remaining in the quarter Robbins put in a layup and was fouled to tie the score at 47. Robbins hit the free throw to put the Stallions ahead 48-47. He came down on the following possession and hit two more free throws for a 50-47 lead that Stansbury did not relinquish.

Robbins’ second half was just a portion of what the Stallions did to come back and win, as Tia added 17 points, and senior guard Niko Chacon chipped in 14. Chacon hit back-to-back 3-pointers early in the fourth quarter, with one at 7:20 that made the score 53-48 and then another at 6:18 that made the score 56-50. Tia’s big plays came earlier as Tooele tried to pull away. He hit a 3-pointer with under 3 minutes left in the second quarter to make the score 20-18, and then he dished an assist to junior guard Tanner Barton, who then nailed a 3-pointer to cut Tooele’s lead to 29-27.

“Everyone played well,” Harris said. “We have to play aggressive with discipline. It’s so hard to go too aggressive and a little wild, or you go the other way and you’re stagnant because you’re uncertain. We’re going back and forth on that continuum, and tonight we hit the sweet spot.”

Barton was the game-high rebounder with nine rebounds, and a few of those were offensive rebounds.

“It’s something we don’t really count on,” Harris said. “If he’s bringing that, now he’s going to be held accountable for it. But he’s so smart.”

A ball went into the Stansbury backcourt with a under a minute to play and the game essentially decided, and instead of picking up the ball for a backcourt violation, which is the usual decision players make in that situation, Barton shielded the ball and forced Tooele’s Justin Pollmann to fight for it. Pollmann made contact with the ball while fighting through Barton, but it went out-of-bounds and returned possession to the Stallions.

“Most kids would either pick it up or let the other kid get the ball,” Harris said. “He just made that kid work for the ball, and it ends up we get the ball. He’s just super smart. If we can start getting him to play a little more aggressive, then that’s a difference maker.”

On Tooele’s side, coach Shawn Faux said it’s all about getting his Buffaloes to play with the same intensity in the second as they do in the first half.

“I’m trying to figure that out of why they just mentally break down,” Faux said. “We’re a tale of two different halves.”

Tia’s 3-pointer in the second quarter cut the Tooele lead to 2 points, but the Buffaloes answered with a 9-2 run to go into halftime, highlighted by 3-pointers from sophomores Matt Memmott and Tyler Lawrence.

But then when Stansbury went on its run to start the third quarter, Faux said he noticed that Stansbury’s players became excited while his own players shut down. He said that moment was the difference.

“Give Stansbury credit, they’ve got some good ball players,” Faux said. “It’s not to take anything away from them, but if we come out and play like we did the first half where we’re challenging shots, we’re moving our feet, and defensively we’re forcing them to their weak hands, then it’s a different story. But we come out the second half and went away completely from everything that got us that lead.”