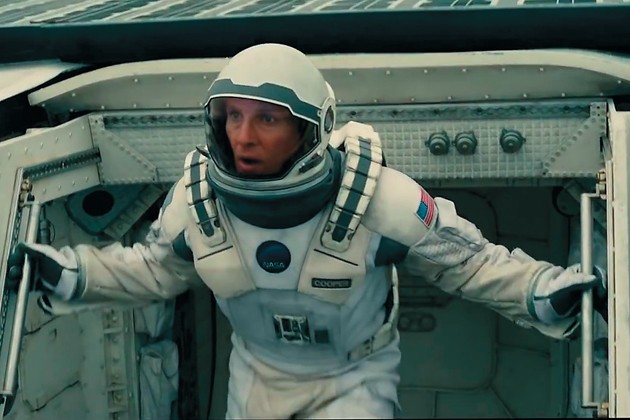 Matthew McConaughey stars as a NASA pilot who has to choose between staying with his family and potentially saving the human race from extinction in “Interstellar.”

When someone makes enough good things, I always start wondering when they’re going to slip up or start repeating themselves.

For Christopher Nolan, “Interstellar” is not that time.

Cooper (Matthew McConaughey) is an ex-NASA engineer turned reluctant farmer doing his part to make up for the food shortage on a not-that-distant-future Earth.

When his daughter, Murphy (Mackenzie Foy) finds a series of clues in her bedroom she ascribes to a ghost or poltergeist, Cooper and Murphy stumble upon a holdout of NASA: To find another planet to populate when the current one inevitably goes bust.

Professor Brand (Michael Caine) convinces Cooper to leave his family behind for a few years to pilot a risky mission through a wormhole discovered near Saturn that reportedly leads to another solar system.

Cooper agrees, much to Murphy’s distress, and he takes off with Doyle (Wes Bentley), Rommilly (David Gyasi) and Brand’s daughter (Anne Hathaway). They set out on the trail of a dozen scouts who left years before on a probable suicide mission to find viable planets on the other side.

That pesky theory of relativity and its effect on time makes the mission harder, even after finding a scout, Dr. Mann (Matt Damon), alive and well. Meanwhile, grown-up Murphy (Jessica Chastain) is bitter at her father’s apparent abandonment of her family but has joined Barnes in trying to save the human race on the Earth’s surface.

The first act is kind of interesting as it imagines the Dust Bowl 2.0, but it seems to drag on after not that long. I mean, I know I have a bit of a short attention span, but I was getting as fidgety as a kid on a sugar high. Even when they got into space a bit, I was checking my watch.

Right around the time they started finding planets, though, I started getting into it. By the time they were trying to go home, I was riveted. And I had worked out most of the mysteries by the time they were revealed (and feeling a little smug about it, too), but Christopher Nolan, as in “The Prestige” and “Inception” and “Momento,” saves a few details for the end.

The cast, too, is stellar, if you’ll pardon the pun. Caine, a staple in Nolan’s films, brings depth and wisdom, while McConaughey provides a strong but nuanced starring role as a man who has to choose between his family and the human race. Damon’s role doesn’t last long, but his character encompasses layers of humanity’s desperation, despair and primal drive to survive at all costs. Bill Irwin and Josh Stewart add subtle humor as a pair of robots.

The effects are gorgeous — in space, it feels a little like last year’s “Gravity” and a lot like a modern CGI take on 1968’s “2001: A Space Odyssey.” Hans Zimmer’s score is surprisingly diverse, especially after almost carbon-copy scores for, say, “Inception” and “The Dark Knight Rises,” and it gives the experience a sort of reverent, religious feel.

Slow acceleration and long running time aside, “Interstellar” brings its viewers on a gripping journey through space and morality, and is well worth the ride.