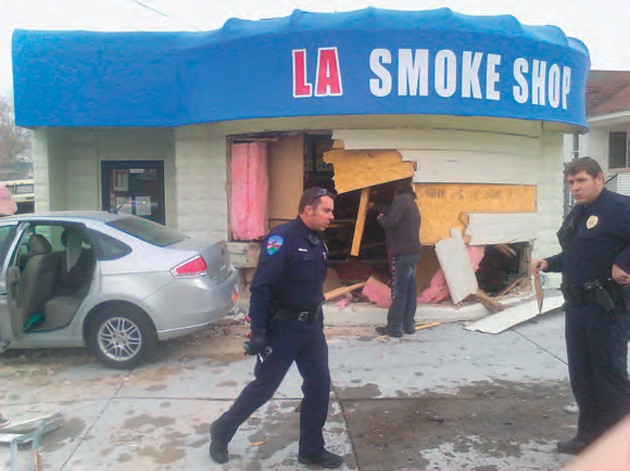 Tooele City Police walk around the LA Smoke Shop Sunday afternoon after a car collided with the building. The driver, Russell Jones, was the only person injured in the accident. photo courtesy of Aaron Farris

A startled — and allegedly drunk — driver made for an exciting afternoon in downtown Tooele Sunday as he plowed through the window of LA Smoke Shop on Vine Street.

Lt. Adrian Day of the Tooele City Police Department said a motorist was stopped in the road a little west of 50 West Vine at about 4:30 p.m. A driver behind him honked his horn in an effort to get the motorist’s  attention and make him move, Day said.

And it worked — a little too well. Day said the driver, 50-year-old Russel Jones of Tooele, put his foot on the gas pedal and shot forward, right into the front window of LA Smoke Shop.

“He was just stopped so somebody honked their horn to get his attention, and abruptly took off and went into a building,” Day said. The store was open when the accident occurred.

Although the front of the building was smashed in, Jones was the only one injured. Four people inside — two customers, an employee and his boss — were startled but unharmed.

The employee, Aaron Farris, said no one in the store saw the blow coming.

“I was just sitting there working, helping people, and all of the sudden the store exploded,” he said. “We all just looked around at it, wondering what’s going on because we had no idea.”

When the dust began to settle they could see the cinderblock front of the store had been taken out by Jones’ car, which stopped next to Farris’ truck parked outside.

Whole chunks of broken cinderblock had been thrown in the impact, Farris said, including some pieces around his truck that were too heavy for policemen to easily move.

Farris said he recognized Jones, who had been a customer, in the car, and said he was incoherent, breathing sporadically and not wearing a seatbelt. Farris recommended to other witnesses that they leave the man in the car until medical help arrived.

Day said Jones was transported to Mountain West Medical Center, from where he was flown to a Salt Lake hospital. Police believe Jones was intoxicated at the time, Day said, but a blood draw has not yet been analyzed to determine blood alcohol content.

No criminal charges have yet been filed against Jones. A damage estimate of the building was not available at press time.

Farris, who has been working for LA Smoke Shop for over four months, said while this kind of event could not be anticipated, it was not unprecedented. In November, another drunk driver, trying to park in the parking lot near the LA Smoke Shop on Main Street, accidentally pressed the gas, not the brake, and hit the building, damaging stucco on its exterior.

“Ever since that happened we’ve talked about how weird it would be if somebody drove into the store, and then, voila, this happens,” Farris said.