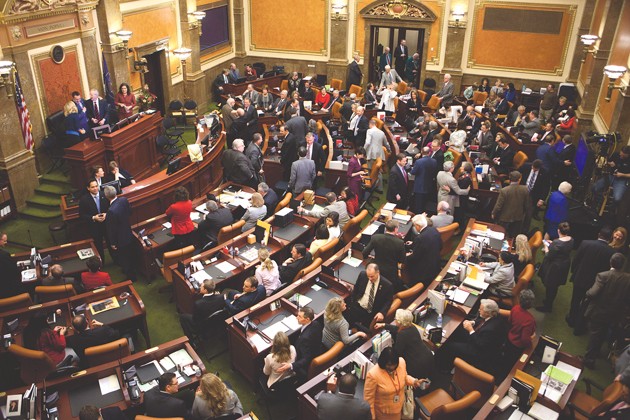 The Utah state legislature, seen here in Janurary 2015, will have the option to adjust when it may begin its sessions if some changes to the Utah state constitution are approved by voters in November.

Constitutional Amendment D rewrites the constitution as it relates to municipal water rights and sources of water supply.

The Utah Constitution currently prohibits a municipality from selling or disposing of its water rights and its sources of water supply, such as wells, springs, or streams.

The amendment was unanimously approved by both the Senate and the House.

No argument was submitted to the Lieutenant Governor’s Office against Constitutional Amendment D.

Constitutional Amendment E adds a section to the state constitution protecting the individual right to hunt and fish — including the right to use traditional methods of hunting and fishing. The amendment also establishes hunting and fishing as the preferred method of managing and controlling wildlife in Utah.

Amendment E states that it does not affect laws related to trespass or property rights, the state’s authority over its natural resources, or the state’s duty to manage lands that the state received when Utah became a state.

“Recognized as “natural rights” for most of human history, the right to hunt and fish has been understood as the right to procure healthy, natural food for oneself and family. However, special interests are actively working to take away these opportunities and, in a growing number of states, they have been successful. In Europe, before the founding of our country the legal right to hunt had been limited to nobles and the monarchy. But on the American continent settlers found bountiful wildlife and the freedom to pursue it. From native peoples they learned to depend on food from the land. They viewed the equal rights to hunt and fish as proof of their liberty,” reads the statement in favor of Amendment E.

Opponents to Amendment E believe that constitutional guarantees of the right to keep and bear arms and the right to protect individuals and families are not about hunting and fishing, according to the statement against Amendment E.

“Without the amendment, you will still be able to hunt and fish, and the state will continue to promote and protect these activities as they always have. No one is even considering taking away our hunting and fishing rights, so why are we considering inserting unnecessary language into our constitution? By adding this amendment, we will dilute our fundamental rights, like our right to protect ourselves and families, our right to free speech, and our right to peaceably assemble,” reads the argument against Amendment E.

Constitutional Amendment F, if passed, would allow the state Legislature to set their own starting date for their annual general sesion. The starting date would need to be on a day in January, designated in law by the state Legislature. The amendment would also exclude state holidays that are not federal holidays from counting as part of the maximum numbers of days for annual general sessions.

“The Legislature has changed the start date of the annual General Legislative Session twice in the last two decades. One change was to accommodate the 2002 Winter Olympics. Another change was to avoid overlapping the Martin Luther King Jr holiday in 2008. More changes will likely be needed in the future, especially if the state hosts another Winter Olympics. The Utah Constitution sets the start date of the General Legislative Session. Changing the Constitution to adjust something as simple as the start date of the General Legislative Session is a lengthy process that costs taxpayers money. Each time the start date needs to be adjusted, a bill must be passed a year in advance and then voters must approve the change in the following November election. This Constitutional Amendment F does not change the number of days the Legislature is in session, it remains at 45,” reads the argument for Amendment F.No argument was submitted against Constitutional Amendment F.

More information about the state constitutional amendments and other ballot issues and candidates can be found at vote.utah.gov.