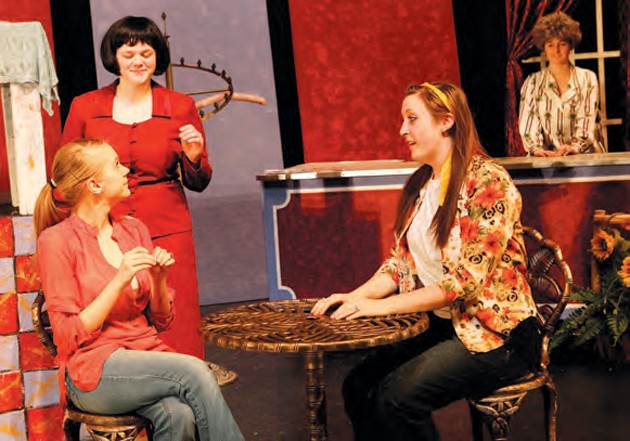 Tooele High School students Caroline Crane, as Shelby, Violet Powell, as M’Lynn, Airdrie Gillie, as Truvy, and Amy Gebs, as Clairee, rehearse a scene from “Steel Magnolias” Monday. The students will perform the play this weekend and into next week.

A beloved tale of family and friendship is coming to Tooele High School’s stage this week.

“Steel Magnolias,” a play by Robert Harling about the relationships of a group of women in the South through times both happy and sad, will be performed at Tooele High School Feb. 28, March 1, March 2 and March 4 at 7 p.m.

First-time director Terry McGovern, who has previously done productions as assistant director, said she stepped up to the plate for this production because of the nature of the piece.

“It was one of the plays that [THS drama director] Mr. [Scott] Henrie has had in the back of his mind for a while and he wanted to produce it,” she said. “This play is normally directed by men, but he thought with it being high school girls, he thought it would be good being directed by a female director, and it’s been going really well.”

McGovern said the cast had been working hard to grapple with the subject’s content — as well as the period in which it is set and its geographical nuances. “I think one of the biggest challenges was helping the students understand what the age was like, because they were all born afterwards,” she said. “We have them do things like watch shows from the 80s, help them understand some of the vernacular, help them understand some of the emotions that their mothers feel, because they’re acting in the age bracket of their mothers, and helping them understand that Southern isn’t such a caricature — trying to make them real women from the South.”

As far-removed as high schoolers in general are from 1980s, this cast is even a little more distant than some. Of the whole cast, the oldest two, Emily Rice and Airdrie Gillie, are juniors. The rest are freshmen and sophomores, including sophomore Caroline Crane, who plays Shelby, and sophomore Violet Powell, who plays M’Lynn. Despite the relative youth of the cast, McGovern said, the players have stage experience and have risen to the occasion.

“They have all done previous shows, not that they’ve had leads but they’ve been in shows before, in the ensemble casts for the most part,” she said. “They’re learning quickly.”

Tickets for “Steel Magnolias” are $7 for adults and $5 for students, senior citizens and children. They may be purchased at the door or in advance by calling 435-833-1978 extension 2189 or by emailing shenrie@tooeleschools.org.