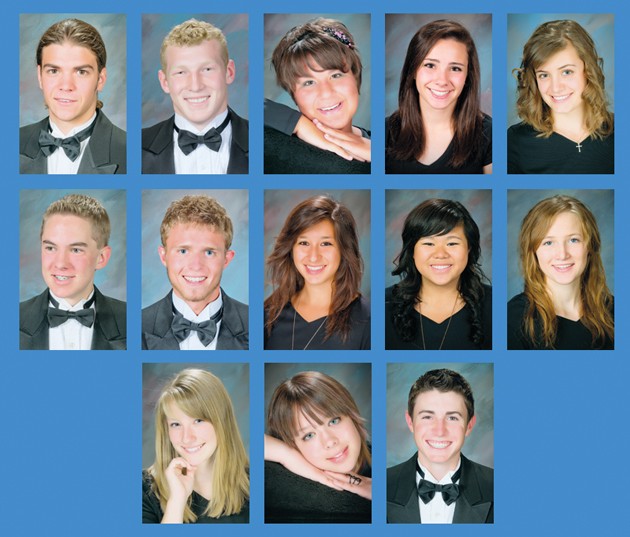 The Sterling Scholar Awards are sponsored by the Deseret News and KSL 5 Television. The program publicly recognizes high school seniors from 57 high schools along the Wasatch Front for outstanding academics, stellar leadership, exemplary citizenship and exceptional service to school and community. A total of 716 students competed in 13 categories at the semi-final competition. Every Sterling Scholar must complete a 20-page portfolio documenting their academic achievements, leadership and service. They are personally interviewed at the semi-final competition by a panel of three judges who are experts in the various categories.

Fifteen finalists in each category are selected to move on in the competition. The finalists again compete with their portfolios and another interview with three new judges. A winner and two runners-up in each category are announced at the Sterling Scholar Award ceremony, which was held at Cottonwood High School in March.

SHS’s first-ever Sterling Scholar runner-up was Amanda Howa. She was selected as one of three top scholars in the category of skilled and technical sciences after competing against 57 high-achieving seniors in her field.

Kaio Alloway is the son of Kurt Alloway and stepmother Gail Strindberg. Alloway has pursued mathematics and computer science, highlighting his passion for computer technology. He excelled in A+ Computer Repair, Net+ Networking and Digital Media. He completed a paid internship with Cygnus Labs where he helped troubleshoot and repair computers. He is an AOIT graduate. He has volunteered at the Lake Elsinore Library, Santa Rosa Plateau Ecological Reserve and the Tooele Senior Center. His career ambition is to become proficient in astrophysics and aero-engineering technology involving design of life support and propulsion systems for deep space exploration. Alloway has enjoyed and developed ability with various musical instruments. In his free time, he shares with others his passions of hiking, skiing, motorcycle riding and rollerblading. Alloway plans to attend USU.

Hunter J. Anderson is the son of Mike and Jamie Anderson. He has served as team captain for the football, wrestling and track teams, and is currently serving as the student body’s business manager. He is an eagle scout and operates his own lawn mower blade sharpening service. He has maintained a 4.0 GPA since the sixth grade and received a 30 on the ACT. He has been awarded a four-year scholarship at both USU and the U of U for academics. He plans on attending USU, and will major in business management for a year prior to serving an LDS mission.

Kharissa De Somer is the daughter of Russ and Alena De Somer, who have always supported her in her family and consumer science endeavors. From a young age, she had an interest in childcare, cooking and other things related to her category. De Somer is the author of a blog featuring easy meals for large families. She also made a twin-sized quilt. She has earned her Young Womanhood Recognition through the LDS church. She is president of FBLA, and is also a high school representative for the USU Tooele Campus. De Somer serves her community through NHS service projects such as a blanket drive for the Children’s Justice Center and a read-a-thon at a local elementary school. She will be attending USU in the fall with an alumni scholarship worth $1,500.

Tali Renee Gomez, daughter of Nancy and Medardo Gomez, is the English Sterling Scholar. She has a 4.0 GPA and scored a 30 on the ACT. Gomez is on the varsity cross country and distance track team. She is an officer in HOSA, NHS and student government. She participated in the homecoming pageant and performed a song she composed. Song writing is a major part of her life because she loves poetry. Her favorite classes in school have been her honors English classes. Currently, Gomez is working toward her pharmacy technician license. She is also a member of MESA and Key Club.

Howa is the daughter of Steven and Ute Howa. She has an ACT score of 30 and a 3.9 GPA. She has received the Tooele County School District Career and Technical Education Award of Excellence and her Chapter Degree as a member of Future Farmers of America. She is receiving her honors diploma at graduation and is currently working on her pharmacy technician license. Howa is the National Honor Society president and the Health Occupation Students of America co-president. She is also the Mathematics Engineering Science Achievement vice president, the Key Club secretary and the Art Club treasurer. Howa has lettered in soccer, track and debate. She has interned at the University Hospital in Mannheim, Germany, the University of Utah Stansbury Pharmacy and at Albertson’s Pharmacy. She volunteers with Swing for Life, a non-profit breast cancer awareness foundation, and also as a youth soccer coach. Howa is planning to attend Westminster College for pre-med as a member of the honors program.

Wesley Hyer, son of Troy and Pamela Hyer, is the mathematics Sterling Scholar. He has participated in Engineering State, math competitions, chemistry/math tutoring and currently, is doing an internship at the Tooele County Surveyor’s Office. His leadership positions include NHS presidency for two years, Science Club historian, various church positions and show choir section leader. He led a clean-up project in Middle Canyon cleaning fire pits and painting tables, and he has helped to organize a youth conference. He plans to go to Brigham Young University to study mechanical engineering, and he has received multiple scholarships. He scored a 30 on the ACT and has maintained a 4.0 for three and a half years of high school.

Luke Lazenby Jones is the son of Randall and Kami Jones. He is the Ballroom Dance Company president and has been a member of ballroom dance teams for four years. He teaches ballroom dance classes on the weekends. He first got into dance as a freshman, fulfilling the wishes of a sister and his natural drive to meet girls. He first enjoyed all the pretty faces and the natural splendor of holding a girl’s hand, but then he found he actually enjoyed dancing. He enjoys the moves, the beat and his favorite: improvisation. He tried out for the GHS Ballroom Team and made it. He has been dancing ever since. He has helped teach mutual groups, choreograph dances for his dance team and goes swinging on the weekends. As student body historian, Jones has promoted school spirit and unity with the Spirit Cup competition, and he helped organize Operation Christmas Child. He has been a member of the varsity cross country and track teams for four years. He is also an eagle scout. Jones plans to attend USU.

Olivia Juarez is the visual arts Sterling Scholar. She is the daughter of Arturo and Cynthia Juarez. She enjoys art in many mediums: oil painting, watercolors, charcoal, tempura, ink and photography.  She has lettered in forensics debate twice and holds the degree of Special Distinction in the National Forensics League. She is the president of the debate team and competed on the varsity mock trial team. She is a member of the NHS. Juarez is Tooele’s Youth Democratic representative. She has assisted in fundraisers like “Kicking Cancer’s Can” and “Mancave Paulie” for Leimeriss Syndrome. Juarez will attend the U of U on a diversity scholarship.

Lotus Lei is the daughter of Li Yi and Ming Chun Lei. She is fluent in Cantonese and has also taken French for three years. She participated in the BYU Foreign Language Fair and has won competitions in Chinese Clubs outside of school. Lei is heavily involved in extracurricular activities. She is the Foreign Language Club historian, a senior senator in student government and president of the Key Club.  She is also the senior editor of the yearbook staff. She is president of the MESA Club and vice president of the Future Business Leaders of America. She is also a member of the NHS. Lei has completed numerous service projects such as Remembering Alex Brown (a texting and driving association) and helping families in need during Christmas. Her future plans include attending college at the University of Utah where she will work toward a pharmacy degree.

Isobel Lingenfelter is the daughter of Matt and Michelle Lingenfelter. She won first place in extemporaneous speaking at the Silver & Blue tournament. She also won first place in Lincoln-Douglas debates at the U of U’s summer camp debate tournament. She placed third place in 4A State Debate in Lincoln-Douglas debating. She has participated in community service activities such as introducing debate to local elementary schools and teaching an art class at Overlake Elementary. She is the president of the debate team and is the Lincoln-Douglas captain. She plans on attending either the University of California Los Angeles or the U of U where she was awarded a scholarship for debate.

Courtenae Irene Nielson is the daughter of John and Lucinda Nielson. She has been interested in music since her youth and strives to improve her talents in every way possible. Her first private instrument lessons began at 8 years of age with piano. She has since branched out to the flute and harp and has also picked up singing. She played the piano accompaniment for “Les Miserables” at Grantsville High School and “Footloose” at SHS. Nielson has also been involved in school as a cheerleader, member of the NHS, track and field captain and ballroom dance company member. She plans to attend Oklahoma State University and pursue a degree in instrumental music education.

Madeline Paige Roberts was born to William Arthur Roberts III and Andrea Roberts on Aug. 12, 1994. Since then, she has achieved great academic success, including maintaining a 3.9 GPA and completing her associate’s degree from Utah State University. She is the Art Club’s vice president and was the club’s secretary. She has organized several art shows since joining the club her sophomore year. Roberts has completed more than 30 hours of community service in her high school career, including personal service for the disabled, volunteering at USU student and alumni functions, and several other projects with the NHS. Roberts completed a rigorous criminal justice course at the Community Learning Center and conducted a successful mock trial presentation as head prosecutor at the Grantsville City Courthouse in front of a judge. She has been accepted to Weber State University, where she has been awarded the presidential scholarship and membership in the Alethia Club. She plans to pursue a master’s degree in criminal justice.

AJ Walters, the science Sterling Scholar, is the son of Glen and Lori Walters. Walters completed an internship at Innovabio. He is also a Biotechnology State Pathway completer and is taking AP Biology. He serves as the SkillsUSA president and placed ninth in state in the SkillsUSA cabinet making competition. He is a member of the LDS Seminary Council for Stansbury High Seminary. He was a student leader volunteer for the NASA Summer of Innovation camp for junior high students and volunteered for 4-H TRY Team teaching robotics. He has a 3.98 GPA and a 33 ACT composite score. Walters was awarded Academic All State 3A 2012 Team for cross country. He is a varsity athlete in both track and cross country. Walters will serve a two-year mission for the LDS Church, and will leave in August, call pending. Upon his return he will be attending USU, double majoring in biological engineering and cellular biology with a minor in paleontology. He received a four-year, full-tuition presidential scholarship to USU.