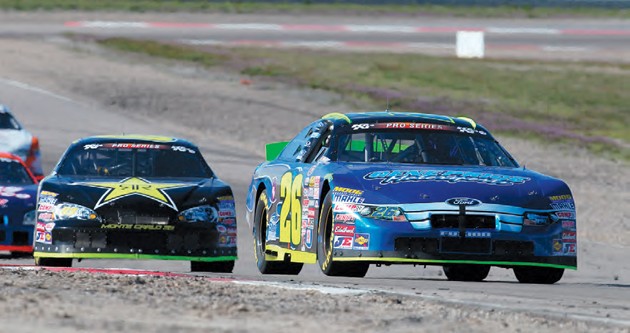 Miller Motorsports Park kicks off its 2012 season Friday through Saturday with the Utah Grand Prix. The event will feature six racing series, with a wide variety of racing machinery that will contest 13 races over the course of the weekend.

Headlining the event will be the NASCAR K&N Pro Series West, a development series populated with both veterans and up-and-coming talent trying to make their way to the upper echelons of NASCAR racing. This will be one of only four roadcourse races for the stock car warriors this season.

Greg Pursley of Parker, Ariz. has taken the checkered flag the past two years at MMP in the main NASCAR K&N Pro Series race. Last year he won the series’ overall championship by holding onto the lead the entire season after winning the first race. Pursley has been solid at MMP the past three seasons after finishing fourth in his first race at the motorsports park in the heart of Tooele Valley.

“I really like the track there,” Pursley said on Wednesday. “The cool thing is that I’ve won on two track configurations there. The first time on the full track and last year on shorter configuration.” Pursley said the key to winning a road race is patience and keeping your car on the track.

Currently, Pursley is fifth in points in the series. It’s the first time in more than a year he has seen any names ahead of his in the championship standings. “We’re excited about going to Miller,” Pursley said. “We had a great test out there. It’s really cool trying to go three-for-three there. We’re the only multi-time winner there. I’m excited about going. I love road racing. It’s going to be a lot of fun.”

Variety will be the name of the game for the weekend, with the NASCAR stock cars playing counterpoint to all manner of road racing machinery.

The Pirelli World Challenge Championship features four classes of sports coupes and sedans, ranging from Corvettes, Vipers, Cadillacs and Volvos to Mustangs, Camaros, Hondas, BMWs and Kias. The new World Challenge B-Spec class, for race-prepped economy cars like Honda Fits, Fiat 500s, Kia Rios and Mazda 2s, will make its national debut. The GT and GTS classes will race together on the 3.048-mile Outer Course, while the Touring Car and BSpec classes will race together on the 2.2-mile West Course. There will be a large number of Utah racers competing over the weekend, according to MMP media manager John Gardner.

Included in that group is Dan McKeever of Grantsville, the director of performance schools at MMP. He will race a Ford Mustang Boss 302S entered by Roger Miller’s Miller Racing in the Pirelli World Challenge Championship.