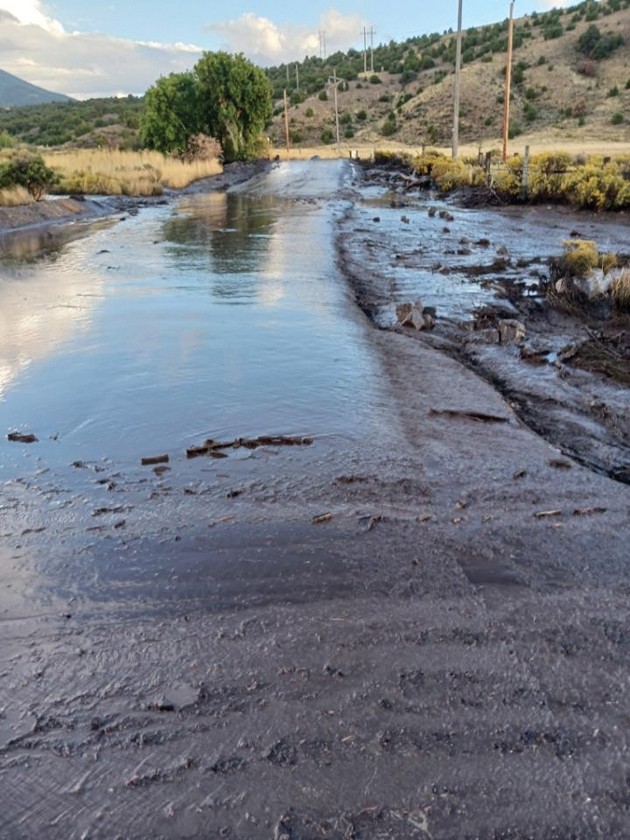 Food waters pool on a road in Stockton.

Stockton residents were given a scare when their town flooded on Sept. 21 shutting down state Route 36 and causing damage to six properties.

Flood waters began flowing down the south side of the burn scar left behind from the recent Jacob City fire towards Ophir Canyon around 5 p.m., according to Bucky Whitehouse, Tooele County Emergency Management Director.

Initially the water flowed into Soldier Canyon Creek, but the creek quickly pooled with water, causing overflow. As water flowed down the canyon, several individuals were evacuated and six properties were damaged, with one resident receiving flooding in their home.

Flood waters traveled way down to SR-36, which caused closure of the road from 5 p.m. to midnight. Traffic was diverted down Silver Avenue, to South Rim, and to the Mormon Trail, which connects to several highways.

“It became challenging, because there was a lot of traffic coming from Dugway,” Whitehouse said.

Trains traveling through the area were also asked to slow down as a result of water pooling near the tracks.

Water flowed so easily down the canyon and into the city as a result of the Jacob City fire, which damaged soil causing it to be unable to retain water, Whitehouse said.

The canyon is also prone to flooding, because of steep elevations and drought conditions.

A third of an inch of rain was logged at the weather station at the bottom of the canyon at the time of the flood.

“It is unknown how much rain fell at the peak elevation of the canyon,” Whitehouse said. “With the amount of flooding we had, we can tell there was heavy rainfall at the top of the canyon.”

Earlier in the day on Sept. 21, county officials began to patrol the canyon and prepare for a potential flood.

This is at least the second flood recorded in Soldier Canyon since the Jacob City fire. The last one occurred on Aug. 13 and caused evacuations.