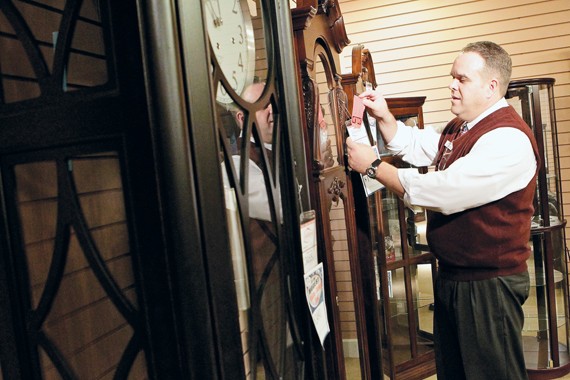 Liddiard Home Furnishings employee Brad Bullough ads a sold sign to a clock Tuesday morning at the store. More than 247 million consumers went shopping for Black Friday compared to 226 million in the same time period in 2011.

The kickoff to the holiday retail season saw local merchants mirroring the big sales gains of their national counterparts.

Nationally over the Black Friday weekend from Thursday through Saturday, 247 million consumers went shopping compared to 226 million in the same time period in 2011, an increase of 9.3 percent, according to a survey of retail consumers commissioned by the National Retail Federation, a Washington, D.C.-based trade association of retail store owners.

Those shoppers spent an average of $423 each this year, a 6.2 percent increase over the average spent on Black Friday weekend last year.

“Black Friday was very successful for us,” said Frank Liddiard, manager of Liddiard Home Furnishings in Tooele. “We had a double-digit percentage increase over last year. People were buying electronics, appliances and furniture.”

Liddiard’s opened its doors at 10 a.m. on Friday morning, while other retailers including Sears and Walmart opened on Thursday evening.

“We opened Thursday evening from 8 p.m. until midnight and then came back and opened at 4 a.m. on Friday,” said Carlos Ibarra, Tooele Sears store manager. “Opening Thursday kind of spread out the total sales between Thursday and Friday, and sales were up a little over last year.”

Tooele Sears had more customers on Thursday evening than for the early morning Black Friday sale, according to Ibarra.

“Black Friday was great this year — much better than last year,” said Teresa McNeill, owner. “Our sales were up 20 percent from last year on Black Friday.”

Marie Curtis, manager at Tooele C-A-L Ranch, found people waiting in line when she opened up the doors at 6 a.m. on Friday.

With national retailers like Walmart, Target, and Sears opening on Thanksgiving evening, national sales on Black Friday itself slipped a little over 2001, according to ShopperTrak, a Chicago-based company that collects and analyzes sales data for retail stores and shopping malls.

“Black Friday shopping continues to expand into Thanksgiving Day and will impact the way we look at all of the Black Weekend results, since more shopping hours allows for more shopping visits and a smoothing of sales across all of the days,” said Bill Martin, ShopperTrak founder in a post-Black Friday press release.

ShopperTrak reported that sales on Black Friday itself were $11.2 billion nationally, down 1.8 percent from 2011.

“This year, though, more retailers than last year began their door-buster deals on Thursday, Thanksgiving itself,” said Martin. “So while foot traffic did increase on Friday, those Thursday deals attracted some of the spending that’s usually meant for Friday.”

Regardless of national trends, local merchants are not ready to open on Thanksgiving Day.

“I don’t plan on opening on Thanksgiving Day,” said McNeill. “I don’t think Black Friday shoppers are really looking for furniture, plus this is a family owned store and I want to be home with my family on Thanksgiving.”

“We will continue to open our regular hours on Friday after Thanksgiving,” said Liddiard. “I think it is sad that we are to a point where stores are open on Thanksgiving Day. I don’t want my employees to have to work on Thanksgiving.”

Curtis said the subject of opening on Thanksgiving Day came up during a conference call with C-A-L Ranch store managers on Monday morning.

“I don’t think you will see C-A-L Ranch stores opening on Thanksgiving,” said Curtis. “Thanksgiving is supposed to be a family day.”