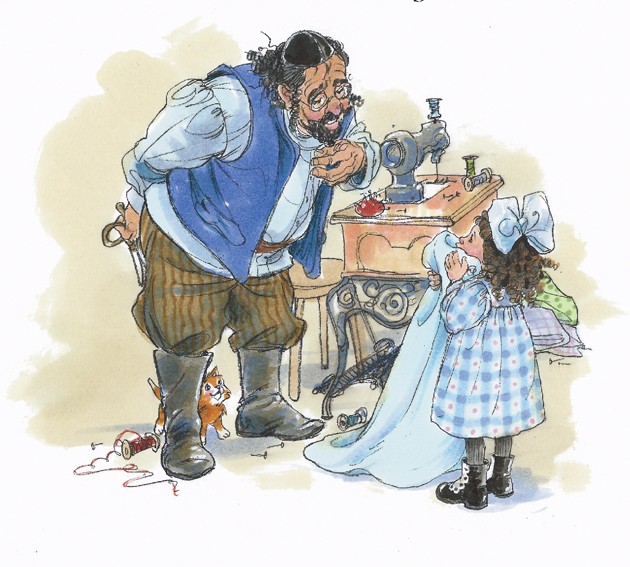 Many years ago, in a little village in Russia, there lived a tailor named Isaac who loved his wife, Rachel, and his family with all his heart. Sadly, soon after his granddaughter Sophia was born, Rachel died.

Isaac was brokenhearted, but one day he decided he must make Sophia something extra-special. He would make her something out of her grandmother’s favorite dress.

And so he set to work with his needles and thread and scissors and tape measures and the lovely dress that was as blue as the sea and as soft as the clouds.

Isaac made little Sophia a blanket.

Sophia loved that blanket with all her heart. It kept her warm in winter and it comforted her when she was sad. As she grew older, that blanket was her best friend. Most of all, she loved it because Grandfather Isaac had made it from the cloth of Grandmother Rachel’s favorite dress.

After many years, the blanket grew old, worn and dirty. “Sophia,” her mother scolded her, “it’s time to give up that blanket.”

Sophia protested. “I can’t give up my blanket! Grandfather made it for me from Grandmother’s dress!”

Finally, her mother complained to Isaac.

He took the blanket and set to work on it. Once again, he took out his scissors and needles and thread and the material that was left from that dress, and he made his granddaughter a beautiful apron.

“Here you are,” he said. He handed Sophia the apron, the same color and feel as her blanket, as blue as the sea, as soft as the clouds.

Sophia put it on and tied it around her waist, and from that day on she wore it everywhere — she wore it over her party dresses and over her trousers and blouses. Sometimes she even wore it to bed over her nightgown.

When Sophia was 10, her mother said, “Sophia, it’s time to throw out that old apron.”

“We can’t!” Sophia protested. “Grandfather made it for me from Grandmother’s dress.”

Sophia’s mother complained to Isaac: “Father, look at this rag. She can’t wear this in public.”

Isaac agreed the apron was a sorry sight, so he took his needles and thread and scissors and the last bit of the dress, and he set to work. He sewed away until he had made an exquisite scarf, as blue as the sea and as soft as the clouds.

By the time she was 12, Sophia’s scarf was worn almost to nothing, and her mother shook her head every time she saw it. Finally, she snatched it away.

“Enough of this scarf!” she complained.

“Grandpa Isaac will fix it!” Sophia said. “He’ll take his scissors and his needle and thread, and he’ll make me something beautiful.”

“There’s nothing to be done with this,” her mother said, but Isaac took the scarf in his hands, walked to his workshop and set to work. After several hours, he emerged holding a pair of socks, just the right size for Sophia, as blue as the sky, as soft as clouds.

Sophia loved those socks. She wore them with everything — with boots and shoes and all alone. She even wore them inside and outside. Finally she wore them out, and she handed her mother what was left of the socks. “Let’s give these to Grandfather, and he’ll make me something new and special.”

Once again, Sophia’s mother brought her father the socks, frayed to nothing. He took out his tools, measured the socks, and he turned them into a tiny hair bow.

And then one day she came home from school weeping. “Mother!” she cried. “I’ve lost my bow. Let’s go ask Grandfather if he can make me something new.”

Off they went to see Isaac, but when he heard what had happened, he shook his head. “I have no more of your grandmother’s dress,” he told Sophia. “I am a good tailor, but even I cannot make something from nothing. No one can.”

Sophia burst into tears. For the next few days she walked around with such a frown on her face and such sadness in her heart that her mother began to worry. And then one morning she had an idea, and she called Sophia and Isaac into the room.

“I realize your grandfather is wrong, Sophia,” her mother said. “He says he cannot make something from nothing. He says no one can. And it’s true: You don’t have Grandmother’s dress, or the blanket, or the apron, or the scarf, or the socks, or the bow. But you do have something.”

Isaac began to smile. He thought he had an idea of what his daughter was going to say.

Sophia smiled, and that very day she sat down and began to write.

You see, it was she who first wrote this story and passed it along.