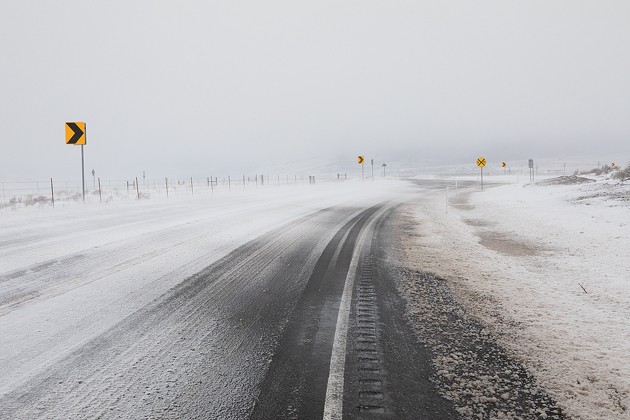 The winter storm that hit Tooele County on Monday helped boost the water year to an above normal mark for the first time since September 2017. The above photo is from Rush Valley during Monday’s storm.

Monday’s snowstorm didn’t just wreak havoc with motorists and give countless citizens a sore back from shoveling deep, heavy snow.

It also did some good, nudging Tooele City into the black on total precipitation for the first time in more than a year.

Ned Bevan, Tooele weather observer for the National Weather Service, said Monday’s storm that dumped 8.6 inches of snow at his reporting station contained .84 of an inch of precipitation.

All that water not only pushed January’s water total above normal, it moved the needle on the 2018-19 Water Year at above normal, too.

“The last time we were above normal for the yearly total was September 2017,” wrote Bevan in an email. “September that year had 2.07 inches of precipitation. Then October that year started us going into a dry spell and we went downhill from there for the remainder of the water year.”

Water years begin on Oct. 1 and end the following year on Sept. 30. Bevan said the 2017-18 Water Year ended with an 8-inch deficit. Normal total precipitation for a water year in Tooele City is 18.49 inches, but last year’s ended at 10.49 inches and further pushed the area into drought.

“Without looking it up, I don’t remember it ever being this dry,” Bevan said last October in a story about the past water year. “I can’t speak for the drought years of the 1930s, but this could be the driest.”

But with the new water year total in the black, and the wettest months of the year — March, April and May — yet to come, Bevan is hopeful the area’s parched soil profiles will get some relief.

“We are headed in the right direction,” he said. “Let us hope it keeps up.”

According to the National Weather Service, Utah is experiencing an El Nino pattern, which forecasts above normal precipitation in southern Utah and equal chances of above or below precipitation for northern Utah.

The Utah Department of Transportation reported traffic accidents on state Route 112, on westbound Interstate 80 near Knolls, Skull Valley and east of Wendover, and on state Route 36 on Monday.