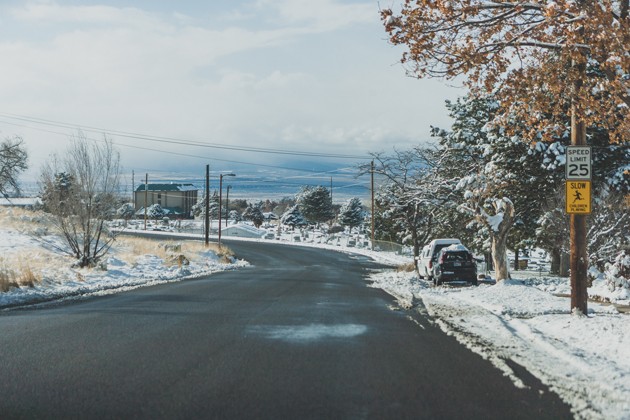 Skyline Drive in Tooele as seen on Tuesday, Nov. 26.

After shoveling driveways three times over the Thanksgiving holiday weekend, Tooele residents who thought there was more snow than usual were right.

Tooele City’s National Weather Service observer recorded a total snowfall for November that was 9.4 more inches more than normal, or 92.2% above average.

The November snowfall totaled 19.6 inches in Tooele City. All of that snow fell between Nov. 25 and Nov. 29.

The actual accumulation of snow at different locations throughout the city may have varied.

Up in the mountains, the storm started out the new water year with a healthy accumulation of snow.

The snow water equivalent, or the amount of water in the snow pack, for the Tooele Valley-Vernon Creek Basin was 159% of the basin’s annual median value on Nov. 30, 2019.

Last year, on the same day, the basin was reported at 87% of the median value, according to National Resource Conservation Service SNOTEL reports.

The coldest daytime temperature in November in the city was 30 degrees on Nov. 26.

The lowest overnight temperature was 17 degrees, also on Nov. 26, with an average nightly low for the month of November of 29.2 degrees.

While the snowpack in the mountains is holding more water than the median year, precipitation in the city is behind for the new water year.

Bevan reported the total precipitation for the water year for Tooele City, which began Oct. 1, was at 2.48 inches on Nov. 30. Normal precipitation total for that time period in Tooele City is 3.5 inches, according to Bevan’s report.

SNOTEL, or snow telemetry, are remote battery powered sites across western mountains that automatically measure and transmit information about snow depth, water content, rainfall, and air temperature. They are managed by the USDA’s National Resources and Conservation Service.

The Rocky Basin-Settlement Canyon site is located at 8,704 feet near Rocky Peak in the Oquirrh Mountains, the Mining Fork site is in South Willow Fork in the Stansbury Mountains at 8,295 feet, and the Vernon Creek site is at 7,401 feet in the Sheeprock Mountains.