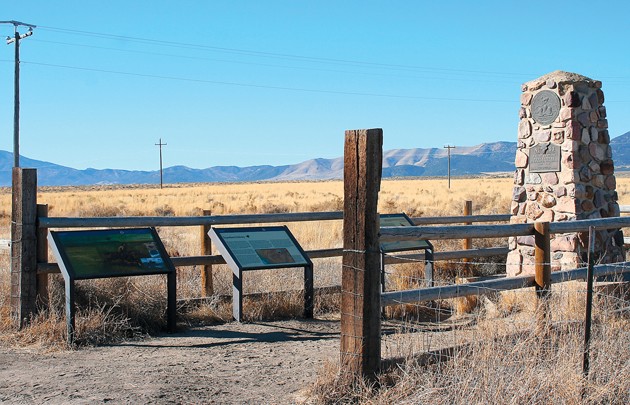 January 5, 2017
Story of Faust’s Creek Station is linked to an ambitious man

Editor’s note: Jessop’s column this week is the continuation of a series on exploring the Pony Express Trail. The series began on Dec. 1 and is proceeding west on the trail from Camp Floyd at Fairfield.

Approximately two miles west of the Rush Valley Station on the Pony Express Trail is a low rise with an old ore loading bin on the right-hand side of the road.

Where the Pony Express Trail crests the hill, park your vehicle, get out and see the interesting rocks on the south side of the road. Some are chalky and eroding into powder, but others are gray and the interiors seem smooth and polished. I collected a few specimens, but I’m not sure what kind of rocks they are. That’s a mystery to be solved another day.

Farther west you will cross several sets of railroad tracks. Use caution here because giant trains blast through at high speed on their way to Salt Lake City or Los Angeles. I wonder what a Goshute Indian from 1859 would think about as one of these trains roar by at 65 mph.

After the railroad tracks the road descends a hill, crosses tiny Faust Creek and then arrives at a junction with state Route 36. Just across the highway you will find a well-maintained CCC monument that commemorates the Meadow Creek Pony Express Station. However, it was known locally as Faust’s Station back in the time of the Pony Express because Henry Jacob “Doc” Faust maintained the station and lived on the property for a number of years.

The marker is not located at the station’s original spot; most sources I’ve found put it farther south along the creek and a mile or two north of Vernon. Whatever the truth about the station’s location, more importantly is Doc Faust, who eked out a living there in the service of the Pony Express Trail.

Faust was an early explorer for the Pony Express and he helped Howard Egan organize and establish the trail. He even built a dugway from Antelope Spring to Schell Creek (now known as Schellbourne Canyon) and it was known as Faust’s Cut-off. He had many interesting experiences with the Pony Express and would fill in as a rider if needed.

As you stand next to the station marker on SR-36, look northwest to the high-rounded peak that caps the Onaqui Mountains. It is 9,020 foot-high Stookey Peak, named for early pioneer Enos Stookey, who helped Howard Egan and Doc Faust establish the mail route and then the Pony Express Trail in Western Utah.

To give you an idea of the wild nature of the country, consider the following excerpt from Stookey’s daughter’s journal:

“Out in the lonely valley one day with his string of pack mules, he (Enos) saw a lone horseman riding towards him. He was apprehensive that it might be a hostile Indian. But as the rider drew near, he saw that it was his friend Doc Faust. Both men were so relieved to see a friendly face that they dismounted and hugged each other.”

Enos Stookey was a character in his own right. On one occasion, he walked 25 miles from Clover Creek’s settlements to Camp Floyd to complain to General Albert Johnston about ignorant behavior of the troops who illegally cut settlers’ hay. Johnston showed Stookey into his mess tent, fed him and his companion, and ordered the troops to make amends for their misbehavior. It seems only fitting that Stookey’s name was forever assigned to the Onaqui range’s highest peak.

This little-known peak rises abruptly to the west from Rush Valley and is steep on its eastern face. Stookey Peak has several springs around its base on the eastern side of the mountain, most notably Hell Hole and Two Spring.

At the summit is an old cairn on top with a weathered U.S. Geodetic Survey Mark underneath. The last time I climbed Stookey Peak, I found some horn coral fossils in the gray limestone at the summit. The view from there is breathtaking.

One of the best views of the peak itself is from Johnson’s Pass on state Route 199 between Clover and Dugway Proving Ground. Just before you reach the pass’s summit coming up from Rush Valley, look to the south and you will see Stookey Peak. You cannot travel the Pony Express Trail in Tooele County without marveling about the men and women who settled the area — like Stookey and Doc Faust.

Faust was born at Hetezeim near Krautsnauch, Germany on June 18, 1833. When he was 5 years old, his family immigrated to the U.S. via New Orleans. His father died shortly thereafter and his mother took the family to Missouri. He received training there in the saddlery trade and then started studying medicine.

He became ill while at school and was advised that the western climate might be beneficial to his health. He headed west in search of gold and fortune like many other men of that time. While at Fillmore, Utah, he converted to the Mormon church and was baptized.

Doc Faust was an industrious individual, and according to journals of the day, he burned the first adobe brick ever made in Utah. On a trip to Salt Lake City, he met Brigham Young, who was so impressed with Faust’s character that he commissioned him to carry the mail between Salt Lake and Los Angeles during winter 1857.

In July 1857, Faust was made station keeper and horse buyer at Rush Valley under Major Howard Egan. The station was soon known as Faust’s Station. Doc Faust had his hand in all kinds of industry and he bought property in downtown Salt Lake where he constructed a large rock building and operated a livery stable.

This building is significant because it eventually housed the Federal Court chambers where Young was tried for polygamy. The federal judge over the case reportedly lived with a prostitute at the time of the trial, which complicated matters greatly. The prostitute said she would swear in court that she had slept with the judge, so the judge ensured that the verdict in the case against Young was “not guilty.”

Yet, everyone knew that Young did have multiple wives. According to his daughter’s journal, Doc Faust and Porter Rockwell had a “fast team hitched” outside the courthouse in case the verdict was guilty.

Next week’s article will continue our study of Doc Faust and his Pony Express Station during the Pony Express’s brief hey-day from 1860-61.