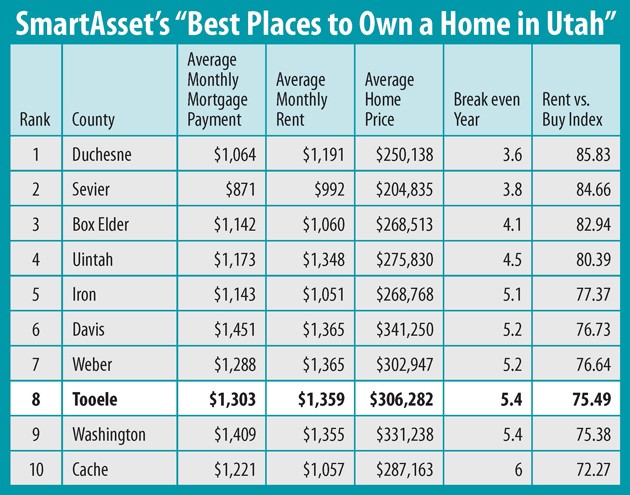 November 7, 2019
Study names county as one of the best places to own a home in Utah

Ranking comes from new report on buying vs. renting a home ♦

Tooele County is one of the better places to buy a home as opposed to renting a place to live, according to a recent study by a New York-based financial services company.

Smartasset listed Tooele County as the eighth best county in Utah to own a home out of Utah’s 29 counties in a recent ranking report based on the costs of buying a home compared to renting.

The study compared the total costs of buying and renting a typical home or rental in each county for a household earning $100,000 a year, according to Smartasset.

The costs of buying included costs for the average priced home in each county at a mortgage rate of 4.5%, along with closing costs of $2,000 and a down payment of 20%. Buying costs also included estimates of insurance, property taxes, and home maintenance.

Smartasset then determined how long it would take for the costs of buying a home to break even with renting at the average monthly rent in the same market.

The best place to own a home in Utah, according to Smartasset’s study, is Duchesne County where the break even point is reached at 3.6 years.

According to Smartasset, for a long time the conventional wisdom was that buying a home was always the better choice over renting.

In 2007, following the housing bubble burst, that conventional wisdom was challenged as homeowners saw their home value, and equity, losing value — and in some cases rapidly, according to Smartasset.

The rent or buy decision today is influenced by personal factors including how long the potential buyer plans to stay in the home, the desire for flexibility, and financial preparedness for the costs of owning a home, according to Smartasset.

“If you’re staying a while it’s always best to buy a home instead of renting,” she said.

Not included in the study, according to Critchlow, is the fact that USDA rural home loans are available in Tooele County, which make homes available with low to no down payment, she said.

Data used in Smartasset’s study came from the U.S. Department of Housing and Urban Development and the U.S. Census Bureau 2017 American Community Survey.