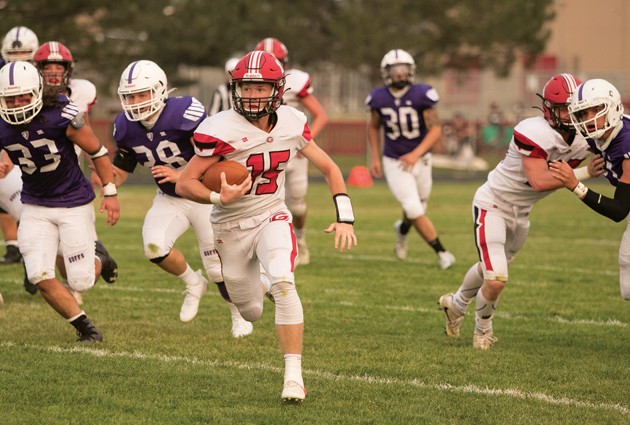 Grantsville quarterback Caleb Sullivan (15) looks downfield as he carries the ball during an Aug. 21 game against Tooele at Grantsville High School. Sullivan has emerged as a dangerous dual-threat quarterback, ranking as the Cowboys’ second-leading rusher in addition to throwing 15 touchdown passes to help Grantsville reach the Class 3A semifinals for the second year in a row.

November 5, 2020
Sullivan steps up for Grantsville

During the offseason, Grantsville junior Caleb Sullivan expected to be the Cowboys’ backup quarterback, with senior Logan White set to take on the starting role for a team that advanced to the Class 3A state semifinals in 2019.

However, that all changed when White went down with an injury in the lead-up to Grantsville’s season-opening game against North Sanpete. Suddenly, Sullivan found himself thrust into the spotlight for a team projected to be among Class 3A’s best. All he’s done since then is take the job and run with it, using his unique mix of athleticism and arm talent to guide the Cowboys back to the semifinals for the second year in a row.

“Once (White) got hurt, it was just kind of ‘take the role’ from there,” Sullivan said. “I took it as, like, everything’s meant to be. It was just my time to step up and take that role.”

Sullivan had the opportunity to learn from last year’s starting quarterback, Jackson Sandberg, who put up impressive numbers in leading the Cowboys to within a single score of the state championship a year ago. He also learned quite a bit from White, who stepped in when Sandberg suffered an injury early in the season and also thrived in that role.

Sullivan brings a different skill set to the table than Sandberg and White, putting up big numbers in the running game in addition to several impressive passing performances. He has completed 61.1% of his passes (174-of-285) for 1,877 yards and 15 touchdowns, while ranking second on the team with 473 rushing yards for three more scores.

“We have confidence in what he can do,” Grantsville coach Kody Byrd said. “He’s always been a great athlete and now he’s kind of bringing the mental game into it and extending it out a little bit more.”

Sullivan had several big games early in the season. He threw for 250 yards in a season-opening loss to North Sanpete and completed 18-of-19 attempts for 204 yards and four touchdowns against Delta. He ran for 105 yards against Tooele, and 92 more against San Juan. During the Region 13 season, he had a brutally efficient 23-of-28 performance for 251 yards and a TD to go with 74 rushing yards.

However, Sullivan and the Cowboys hit a bit of a rough patch during Region 13 play. Sullivan had four passes intercepted in a loss to South Summit and was held to minus-43 yards rushing in losses to Juan Diego and Morgan. The Cowboys suddenly found themselves trending in the wrong direction as the postseason approached, something Sullivan said was a product of a bit of a lackadaisical approach to their preparation.

“During those rough patches, we were kind of laid back in practice and it kind of carried over into the game,” he said.

A renewed focus in practice, as well as the return to health of several key players, has rejuvenated the Cowboys since the playoffs began. They ran for 331 yards in a blowout win over Emery in the first round, with Sullivan rushing for 108 yards to go with 97 passing yards and two touchdowns. Their second-round game against Summit Academy was more of a grind, with Sullivan throwing for just 45 yards, but he had 71 rushing yards and picked up a crucial first down with a 16-yard run that eventually led to the game-winning touchdown.

Now, the Cowboys sit right back in the same position they found themselves in a year ago: one win away from a chance to play for the state championship. They face rival Morgan in a state semifinal game Friday at 5 p.m. in Cedar City, with the winner facing Juab or Delta for the title on Nov. 14 in St. George.

“I feel like we are meant to go pretty far in the playoffs,” Sullivan said. “Hopefully, we can pull it out this year.”