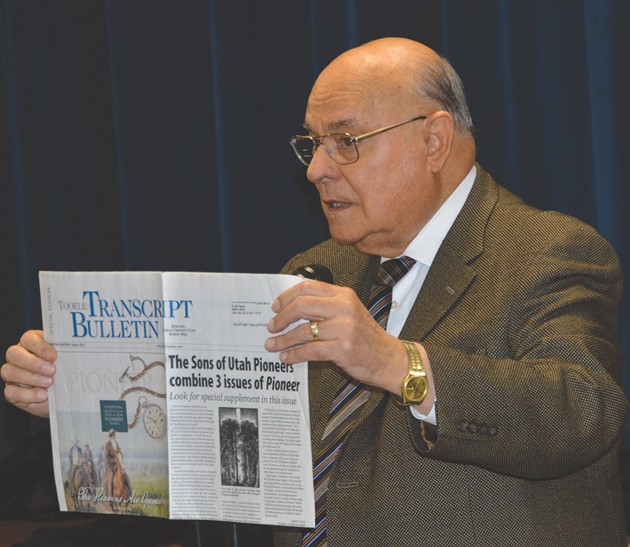 Those are the exact words Dr. William Tanner said as he explained the process and sometimes frustration that goes into gathering photos and artwork, and finding writers willing to research and submit their labors to the committee that oversees the printing and distribution of “Pioneer,” the gorgeous and fulfilling magazine of the Sons of Utah Pioneers.

When one becomes a member of Sons of Utah Pioneers, part of one’s yearly dues goes to pay for this collector quality magazine. Dr. Tanner is head of the committee of writers, artists, photographers, layout and finally printing and distributors of this quarterly jewel. Nearly everyone who works on “Pioneer” does so as a service to the art they love and are professionals in their fields. It is truly a labor of love for those involved, but with so many moving parts and permissions required, it can be a frustration that greatly tests the patience of this volunteer effort.

When Dr. Tanner said, “there are printers and then there are printers,” he was paying the highest compliments to the Tooele Transcript Bulletin, which has the final leg of the process, and always does a wonderful job of meeting deadlines so we can all have our copies of this endeavor.

He couldn’t say enough good about our local Transcript Bulletin printers who produce a thick papered, glossy magazine that rivals any in the country. Most members said they read it from front to back and then file it away for future reading again when a question of Utah’s history comes up. For example, this last issue contains 68 pages of the beginnings of the magazine and how it evolved to the work of love, art, and yes, frustration that goes into such a marvel that we all wait for every quarter.

Dr. Tanner told about one issue that ended up being 9 months late in distribution. They had made the decision to make the magazine quite a bit larger so that the writers could sink their research and creative juices into something of real substance. The only problem was that it became too large to be mailed out under the license and cost that had been the norm.

But working together with Bruce Dunn and the rest of the Transcript Bulletin staff, they found a way to meet the postman’s demands by deeming it a supplement to the Tooele Transcript Bulletin. This very issue is the one that he is holding up in the photo taken during the last dinner/history meeting of the Sons of Utah Pioneers Settlement Canyon Chapter.

Dr. Tanner named some of the previous issues that really became a hit with the members. There have been past issues about Blacks in the Church, written by a University of Utah historian and instructor. Also, an entire issue was just about the scroll developed by CCA Christensen to teach Indians and others about the gospel. They have put together several issues working hand in hand with the Church History museum and the Tabernacle Choir on Temple Square, The Constitutional Convention history before Utah was given statehood, and the Colony Issue about the early pioneers sent out by Brigham Young to colonize the West have been a couple of the more successful issues.

“The Heavens Were Opened” became such a collector’s edition that many of that issue were hardbound. He generously presented a hardbound copy to Betty Lee who was closest in age and birthdate to him that evening. “Women’s Suffrage” and the leadership of Utah is the present issue they are putting together now.

All in all it was a wonderful evening of good potluck dishes to consume, followed by Dr. Tanner’s presentation that was also wonderful to consume. If you have interests in history and the pioneers, you’ve got to join us the first Thursday of every month. You don’t have to have a Utah Pioneer in your ancestry to join us. Potluck dinner starts at 6:30 p.m. followed by quality presentations.

Don’t miss our March 5 dinner meeting. Ron L. Andersen, who has researched and written several books about Abraham Lincoln and Joseph Smith, will join us. He’ll probably bring several copies of his books that you can purchase, if so inclined.