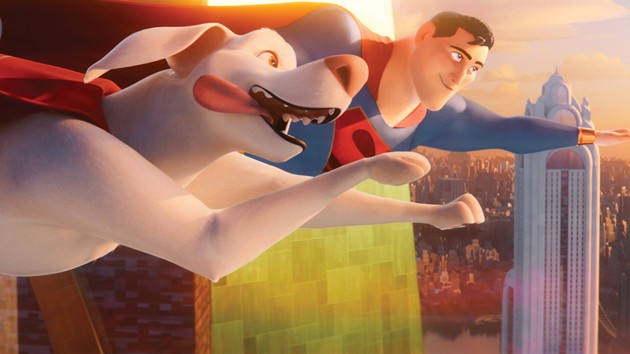 Super-Dog and Superman in "DC League of Super-Pets."

Just in case you’re midway through DC’s newest movie “DC League of Super-Pets” and forget which comic book franchise you’re watching, the DC company has so graciously put the franchise in the movie’s title for you — now you have no excuses.

The film follows Krypto the Super-Dog, voiced by Dwayne Johnson, Superman’s best friend from his home planet of Krypton. They both share the same powers and fight crime side by side in the city of Metropolis.

Everything is peachy keen until Superman, along with the rest of the Justice League, are kidnapped by a maniacal gerbil with newfound superpowers. This forces Krypto to team up with stray pets Ace as voiced by Kevin Hart, PB, Merton McSnurtle, and Chip, who also have newfound powers to save them before it’s too late.

However, helping the group harness these powers may turn out to be an even more difficult task than the one they have before them.

As far as a kid’s movie goes, “DC League of Super-Pets” nails it on the head.

Throughout the movie, there is a lot of interaction between the kids in the theater and the action playing out on screen — unlike this year’s other anticipated kid-film “Lightyear,” which just put the kids to sleep.

Also, as I was leaving the theater I heard a young boy yell out, “That was the best movie ever!”

I guess I can’t argue with that. There you have it folks, the best movie ever.

But as far as a kid’s movie that’s also entertaining to the kids’ parents goes — I’m thinking of Pixar classic’s like “The Incredibles” or “Toy Story”— rather than nailing it on the head, the movie nails it on the toe in typical cartoonish style; it’s silly to the point of annoyance.

Instead of comparing it to Pixar’s golden age, a better comparison is to “Hotel Transylvania” — a movie I despise — where most of the jokes and gags stem from stereotypes of iconic monster characters. This time the stereotype is on pet owners.

But this was already done with “The Secret Life of Pets,” another pet movie voiced by Kevin Hart, back in 2016. “League of Super-Pets” is basically a rip-off of these two already not good movies.

In short, it doesn’t offer anything new. That is, unless you wanted another animated pet movie with a superhero twist. Can’t we be done with superhero movies yet?

And above all it’s formulaic. I could’ve left the movie ten minutes in and come back at the climax and walked you through beat by beat of how we got there.

I’m in a bit of a bind; I can’t give the film a negative review because it is good for its intended audience, but I also didn’t like it.

If you’ve got kids who’re interested in superheroes, then take them to it. But if you’re outside of that category, I wouldn’t see it if I were you.

The film is rated PG for action, mild violence, language, and rude humor. Also a disclaimer for parents who are sensitive to exposing their children to politically correct themes, the film does feature a lesbian couple at one instance.