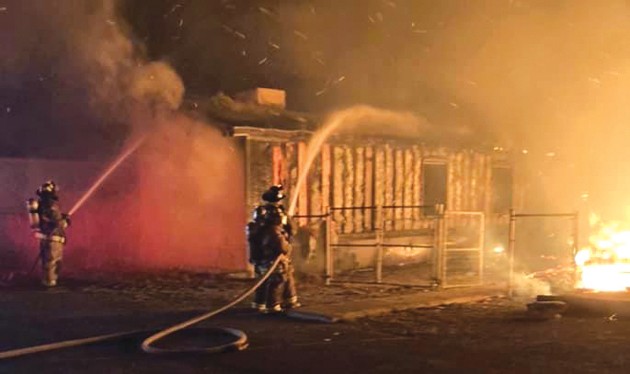 Wendover Fire Department firefighters battle a blaze on Wednesday morning at the UDOT compound in Wendover. Two trailers involved in the fire were reported to be a total loss.

An arson fire in Wendover, Utah  caused two structures to catch fire. A suspect is now in custody.

When firefighters arrived at the scene they noticed that the two structures were on fire and immediately began fighting the fire, according to a press release by the fire department.

The trailers were fully engulfed in flames and the West Wendover Fire Department, located in Nevada, was called to assist with the fire.

Officials at the Wendover Police Department determined that a resident of the UDOT compound had deliberately set a single-wide trailer located on the property on fire, according to the release.

This caused a vacant nearby trailer to catch fire and burn.

Both trailers were completely destroyed in the fire, according to the press release.

A 28 year old Wendover man, who has since been identified as Joshua D. Gonzalez, was arrested, according to the Wendover Fire Department.

Gonzalez is being charged with two counts of aggravated arson.

No injuries from the fire were reported.

The state fire marshal and local officials in Tooele County are assisting with building a case against Gonzalez, according to Nick Street, public information officer with the Utah Highway Patrol.

The suspect has been booked into the Tooele County jail, according to Street.

“It’s really unfortunate that we have had this loss of state property,” said Street. “Looking on the bright side, it’s nice that no employees were harmed. It’s sad for tax payers because it’s their property that was destroyed.”