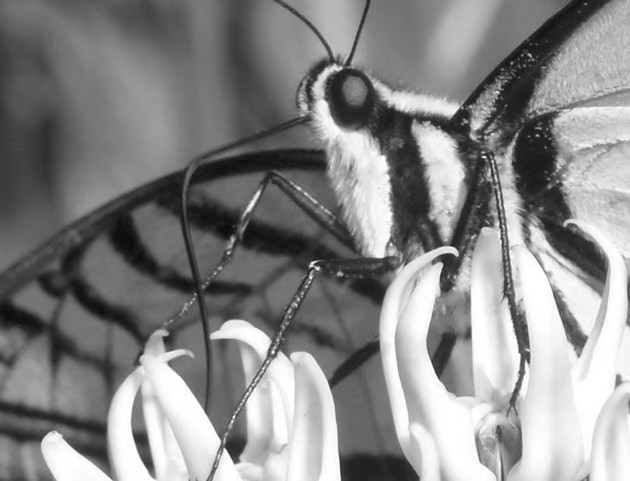 This two-tailed swallowtail butterfly was found sipping nectar from a milkweed plant in Middle Canyon.

October 4, 2012
Swallowtail butterfly is one of a kind

Growing almost the size of small birds, the two-tailed swallowtail’s wingspan ranges 3 to 5 inches. Its main wing colors are yellow with black stripes and blue with orange tinting at the bottom of its wings.

Its wings’ vibrant colors play a big part in survival. To birds and other predators, bright colors on an insect usually signal “poisonous,” so they will usually leave the two-tailed swallowtail alone. In case colors are ignored, predators are tricked by the orange and blue streaks on the bottom of its wings. These colors look more like its face than its back. So if attacked, it will be from behind instead of its face, giving it a greater chance to escape to safety.

Like all butterflies, the two-tailed swallowtail needs to sip from puddles of water, dung, sand or mud that has excreta or animal urine in it. This is called puddling. Although males tend to puddle more than females, they do this for the minerals and sodium, which builds their energy and metabolism that is needed for their flying sprees in search of mates.

The dissolved salts are also used to make pheromones and sperm so when a male butterfly mates, not only does it transfer the sodium the female needs, but it also gives the eggs enough salts to make up for the lack of plants they will miss eating as caterpillars.

Addie T. Lindsay is 16 years old. She is an accomplished writer and photographer of wildlife creatures, big and small. She can be reached at CritterChatter@live.com.