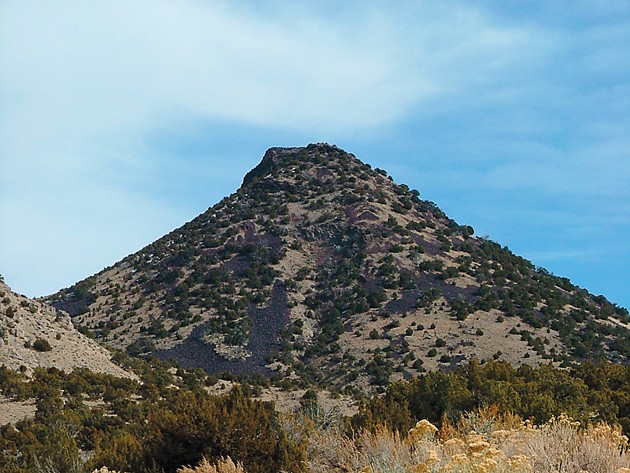 Tabby’s Peak as seen from the wash bed west of the peak.

May 15, 2014
Tabby’s Peak is unlike any other summit in the Cedar Mountains

As winter lingers on and we long to again follow the forested mountain trails to the high peaks, it can be worthwhile to turn our attention to the lower ranges.

The Simpson, Dugway, Keg and Cedar mountains are some of the lower ranges and all are unique. There is a purple, conical peak of volcanic origin in the southern half of the Cedars just north of Rydalch Pass that is particularly interesting.

Known as “Tabby’s Peak,” it is named after a wily old Goshute Chief who lived with his band near Grantsville in the 1860s. It must have been a great honor for the chief to have the peak named after him since it probably was a sacred place to the Goshute and Shoshoni Tribes. You can read more about Chief Tabby in Nicholas Wilson’s “White Indian Boy” and Maj. Howard Egan’s “Pioneering the West.”

There are several interesting points about Tabby’s Peak that are not found on the nearby mountains. It stands at the top of Rydalch Canyon and is a completely different color than the brown, juniper dotted hills of the Cedar Mountains.

I started my hike to the peak on a cold February day in 2007. I began from the west slope down the canyon where a prominent dry creek crosses the road. This is the Tabby’s Spring drainage and my parking spot was approximately .7 of a mile west of Rydalch Pass. There had been a slight warming trend and it was enough to melt the snow off of the peak’s southwest-facing slope to the summit.

I grabbed my pack, camera and water, and headed northeast along the drainage. It was littered with cow pies. I have never had the misfortune of finding myself in a live mine field, but this foul section of Rydalch Canyon came close. After a few hundred yards, the pies became less prevalent and it was enjoyable to walk along the bottom of the wash. It was covered with gravel and stones of various sizes. It was a curious thing to find frozen, green, “lambs ear” in the wash, which is a velvet-type plant with large rounded leaves. Right next to it were frozen skeletons of sunflowers from the previous season.

I followed this drainage for about .5 miles to where it began trending north toward the spring. At this point I left the drainage via an old cattle trail and climbed onto a juniper-covered bench immediately south of the summit cone. Walking through this area was easy but the summit looms large ahead as you reach its base. The top of the peak is only about a half mile away, but you will gain 1,100 feet in elevation — roughly the length the Empire State Building.

While ascending, you will encounter numerous boulder slides of strange, black and purple rock. The average size of these boulders is about twice the size of a basketball and there are literally thousands of them. This is no talus field; it is easy to climb up the boulders if you are careful. Some of them slip but most provide good footing and are actually easier to climb on than the dirt slopes next to them.

There are old, large junipers on the peak with thick trunks. This area does not appear to have suffered from wildfire for hundreds of years. The boulder fields have probably served as a fire barrier since the trees on the surrounding hills are much smaller in circumference.

Under some of the junipers the rocks are covered with beautiful orange and yellow lichens. As I rounded the summit cone heading east, Skull Valley and the Stansbury Range came into view and it was awesome — the 11,031 foot-high summit of Deseret Peak in particular. Near the summit, the entire mountain turns to piles of these same black and purple boulders with no vegetation or dirt.

As I broke onto the spine of the summit, I was amazed to find a rock formation similar to that of Devil’s Post Pile on Dugway Proving Ground. However, these hexagonal shaped columns of basalt laid horizontally like stacked wood. They were from 8 to 30 feet long and some bore names of hikers inscribed with a knife. To the north the summit falls away abruptly in sheer, 100 foot-high cliffs.

The view from the top can be described as directions on the compass rose: To the north are the higher brown summits of the Cedar Mountains; northeast are the Great Salt Lake and Stansbury Island; east across Skull Valley is the magnificent Stansbury range and its smaller neighbor the Onaqui; southeast is Lookout Pass and the Sheeprock Mountains; and to the south you can see the higher peaks of the southern Cedar Mountains, Davis Mountain, and the Indian Peaks of the Simpson Range beyond

To the southwest you can see Keg and Topaz Mountain, the Dugway Range, the House Range, Fish Springs Range, Granite Mountain, Mount Moriah in Nevada, and the Deep Creek Range; west you can see Wildcat Mountain, countless sand dunes of the Knolls area and the Toano Range in Nevada; and to the northwest is Pilot Peak, which guided Fremont, Stansbury, the Donner-Reed Party, and many other explorers and emigrants. Also visible is the Newfoundland Range.

Tabbys Peak is not a long hike from the road but the elevation gain is intense, the boulder hopping is fun, and the geology is interesting. Plan to spend some time on the summit; it is unlike any other peak in the Cedar Mountain range. In fact, I haven’t found anything similar to it in the desert other than Devils Post Pile, which is inaccessible due to its location on military property.

To get to Rydalch Canyon, follow state Route 196 south from Interstate 80 past Iosepa where you will see a brown Bureau of Land Management sign on the right side of the road that says “Eight Mile Spring – Rydalch Canyon.” Turn right onto this road. About a mile later the routes to Eight Mile Spring and Rydalch Canyon separate. Make sure that you keep left at this junction, and follow the signs for about 14 miles southwest to the mouth of Rydalch Canyon. Once you top out on Rydalch Pass, Tabby’s Peak will be obvious on the skyline to the north. Go prepared with everything you need and enjoy Chief Tabby’s wonderful peak.