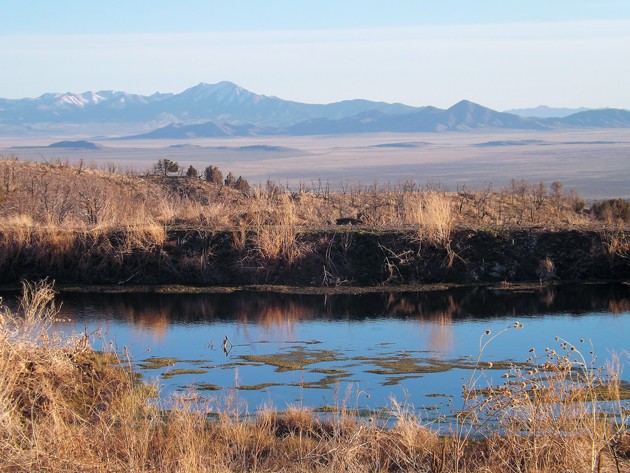 Barlow Creek Pond in Skull Valley is near a dirt road that heads north toward Deadman Canyon and Spring Creek.

April 14, 2016
Tales about Spring Creek on the west side of the Stansbury Mountains hold true

For years, I have heard old-timers tell stories about a stream where there really shouldn’t be one on the west side of the Stansbury Mountains north of Terra.

It’s called Spring Creek on the maps. One day after work, I went to see if the stories were true. I knew the creek was supposedly on the Stansbury bench north of Terra, so I headed in that direction.

I drove east on SR-199 from Dugway and then turned left onto the old Lincoln Highway just before Terra. I went west for about a mile to where a straight fenceline heads north. A road follows the fenceline, and this is the access I used to reach the Condie Meadow area. All-terrain vehicle riders have turned the road network here into a confusing maze, so you just have to follow your nose toward the mountain.

In years past, I have been able to drive my 4X4 truck all the way to the pond that consumes Barlow Creek, which is a flowing stream. But precipitation and runoff have been unkind to this area; roads higher on the bench have suffered severe damage and are, in my opinion, only accessible by ATV.

A major problem you will face when driving here — rain or shine — is sand. There’s lots of it. Vickory Mountain rises abruptly to 10,330 feet high from Skull Valley and obstructs sand blown in from the Great Salt Lake Desert. As a result, the west foot of the mountain is comprised of land fingers, ridges and draws that are made of piled sand. Junipers, sagebrush and some sparse grasses grow there, but if you stripped that thin layer of vegetation off, large sand dunes would be exposed.

Just before Condie Meadow and Barlow Creek, the road dives unreasonably into a deep draw and climbs steeply out. I told myself not to push my luck and to park on the south rim of the draw and walk from there.

But I changed my mind and convinced myself that I could descend it and climb out the other side. But the wash was cut deeply by rain and I dragged my truck’s back end when I crossed it. As I tried to climb the other side, I got stuck and my truck’s wheels spun uselessly in sand.

I got out and surveyed my predicament. I find if I stop and give a tough situation a good look, I can usually figure something out. This time was no different. I used gravity to back down as fast as I could to get another run at it. It was a white-knuckle affair because I didn’t want to get stuck in a sandy wash in the middle of nowhere. But my strategy worked and I climbed out of the wash on the north side.

I knew I would face the wash again on the way out, but I figured I was there so I might as well hike. On foot, I headed north along the Barlow Creek access road at 6:40 p.m. The sand on the road was deep and there were animal tracks on it from deer, rabbit, mice and birds.

I reached Condie Meadow and the pond in 20 minutes, walking just over a mile. I was racing the sun, so I only took about 5 minutes to look around the pond and stream. When you look back down at the desert from here, the juniper carpet blanketing the hills, the blank tan of Skull Valley, and the knolls that rise from the valley are beautiful in their own way.

A dirt road heads north from the Barlow Creek Pond and switches back through a draw and then emerges on a high bench of the mountain. There are striking views of the “Delle” in the Onaqui Mountains, the Davis Knolls and Red Pine Mountain in the Sheeprock Range.

One thing I found disappointing was the area had burned several years ago. From the valley sage through the juniper woodlands, all the way up to the mountain firs, the vegetation was reduced to charcoal. Ghostly toothpick woods litter the hills. Some of the hills look like cactus lobes with skeletal trees for quills.

But a saving feature of the area is a massive limestone gate visible halfway up Vickory Mountain. The cliffs of this gray limestone reef are over 100 feet high in places and are an abrupt outlier from the surrounding slopes. Enhanced by the snow-capped heights of Vickory Peak, the cliffs make for a stunning mountain scene.

I continued north along the road, which made a long detour west and then cut back towards the east. It descended steeply into Deadman Canyon, which in this area is a wide, deep, stony wash. I was irritated by the road’s circuitous route, but was in no mood to challenge the canyon sides, so I followed it as it made another long detour west, climbing out of the canyon bottom.

I was sure that Spring Creek was a few draws north of Deadman Canyon and continued. I stopped for a moment and to my surprise, heard running water and realized I had found the creek. The time was 8 p.m. and the sun was just setting behind the Cedar Mountains. I had come too far just to turn back, so I explored the creek bed for about a quarter mile.

Spring Creek is fed by a series of springs that emanate from the base of some rounded hills. Unfortunately this area was also destroyed by fire, which is a shame because there were some large tree trunks that were burned black at their bases and stripped of any branches. It must have been a beautiful place before the fire. Unlike Barlow Creek, which is consumed by irrigation and thirsty sand, Spring Creek runs for a considerable distance because the base of its little draw is composed of limestone chunks and round stones.

Due to the rough terrain, I knew it would take me a good hour to cover the 2.5 miles back to my truck. I climbed out of the draw and headed cross country to intersect the road. I soon found it and took a break to drink water and secure my camera. I headed off in the growing darkness. Jackrabbits darted this way and that, an owl hooted and the stars began to appear as I moved along.

I made it back to my truck around 9 p.m. The wash where I got stuck earlier was nerve-racking in the dark, but I got across and climbed out the other side without trouble and made my way back to the Lincoln Highway and then SR-199.

This area, while interesting to explore, is not a place for the faint-hearted or inexperienced explorer. Make sure you first study maps of the area and do not attempt to cross any sketchy draws. If a streambed or wash looks like you shouldn’t try it — don’t. Avoid washes and low points if rain is expected.