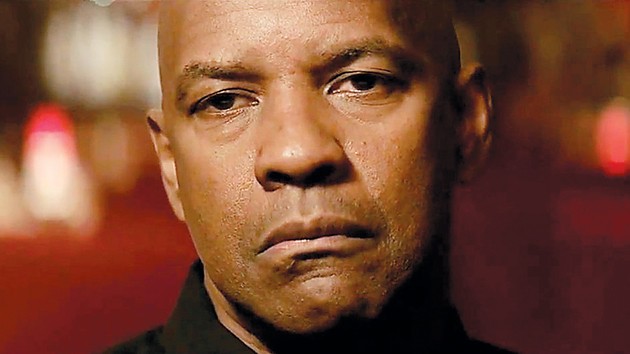 Denzel Washington stars as Bob, who seems really boring until the Russian Mafia gets on his bad side. image courtesy Columbia Pictures

When I watch some movies, I can’t help but wonder what was going on in the writer’s room when they were crafting the plot.

For “The Equalizer,” which is not to be confused by the Clint Eastwood flick of the same name, I imagine at least one of them had just watched “Home Alone” and thought, “Hey, this is pretty great stuff. You know what could make it better? If the bad guys actually died.”

And thus Kevin became a middle-aged black man with OCD and a MacGuyver-like ability to kill someone using anything. Anything. He took one guy out with a book.

Bob (Denzel Washington) lives a simple life. He wakes up at the same time every morning, eats the same thing for breakfast, brushes off his sneakers before putting them on and takes the same bus every day to his job at a home improvement store. He never eats refined sugar or things with too much sodium, and he takes his own tea bags to the diner he goes to read in every night. He is the most boring man in the world.

But wait! There’s more! When a fellow diner denizen (Chloe Grace Moretz) gets in trouble with the Russian mafia, Bob snaps into action. He follows the group of pimp-drug dealers into their den of debauchery and asks politely for the girl to be left alone. When that doesn’t work, he takes out all five of them in 28 seconds, using mainly corkscrews.

The killings, which effectively cripple the Russian mob’s business on the eastern seaboard, draw the attention of a mysterious man (Marton Csokas), who seems nice until he beats a man to a bloody pulp using an ashtray — and he’s got his sights squarely set on Bob. Bob pulls in a favor with some friends from the old days (Melissa Leo and Bill Pullman) to learn more about this man and stay one step ahead of the ruthless mob.

If I ever see this again, I’m keeping better track of the body count. Just making a quick tally, there are more than 20 (that we see direct evidence of), all killed in new, inventive ways. I thought “Gangster Squad” cornered the market on nifty deaths, but “The Enforcer” has gone above and beyond. It could be an Internet listicle: “A Dozen Nifty Ways To Kill Someone Using Common Household Items (You Won’t Believe #8!)”

Unfortunately, the novelty struck me as being less macho than hilarious. I don’t want to give any spoilers, but during the final scene, I actually laughed so hard I cried. It was just that ridiculous. Everyone around me was cheering, though, so I may have been in the minority with my reaction. I also had to laugh at the good guy-bad guy split. Right before he goes all ape-crazy on the baddies, Bob always looks at them and sees their tattoos. Every single time, because the bad guys always have dozens of tattoos, while the good guys, pretty much without exception, do not. I haven’t seen moral lines this clean since the days of cowboys and Indians.

You’d think with that much bloodshed this movie would move along at a pretty fast clip. I mean, yes, sometimes it did, but it also tried to establish Bob’s self-imposed exile with tableaus from his life at Home Mart and contrast that with his bloody nighttime fisticuffs. Bob, however, comes off less like Dr. Jekyll and Mr. Hyde than he does a violent man keeping it all together by controlling every aspect of his life, and it is terrifying.

In that respect, though, the movie gains some lift on the wings of its talented cast. And actually, while Washington does a fine job, it would have been better if we’d seen more of Moretz, Leo and Pullman’s characters. Although all three had relatively brief appearances, their characters were skillfully played.

The performances rescue what would otherwise be yet another too-violent film about a man trying to escape from his mysterious past and discovers how to use his destructive talents for good. I mean, it’s still not amazing, but I’ve seen worse.